An AirAsia Airbus A320-200 aircraft with 162 people on board went missing yesterday on its way from the Indonesian city of Surabaya to Singapore, making it the third major air disaster in the region during the year. 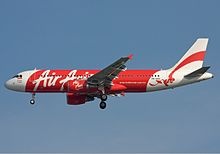 The flight took off from Juanda international airport in Surabaya at 0635 hours and was scheduled to arrive in Singapore in about two hours.

The plane was over Java sea, between port of Tanjung Padan on the Balitung island and the town of Pontianak in West Kalimantan on Borneo Island, when it went missing, about midway between the origin and its destination, Djoko Murjatmodjo, Indonesia's acting director general of transportation said.

Before it went missing, the pilots of the airplane have asked to deviate from the usual route due to bad weather, but there was no distress signal from the plane, the official said.

"The aircraft was on the submitted flight plan route and was requesting deviation due to en route weather before communication with the aircraft was lost," AirAsia said in a statement.

The pilot and the first officer of the airplane were well experienced, AirAsia said.

The aircraft carried 155 passengers and seven crew members, according to Indonesia AirAsia - 156 were Indonesians, three were South Koreans and there were one each from Malaysia, France and the UK.

Relatives of the people on board gathered at both Surabaya and Singapore following the news eagerly awaiting further information.

Singapore, Malaysia and Australia have offered to help in search. Malaysia said it was sending vessels and a C130 aircraft while Singapore had also sent a C130 and more planes and ships are on standby, officials said.

Searchers currently suspect that the disappeared airplane is on the bottom of the ocean.

"We currently suspect that plane is located on the ocean floor," Bambang Soelistyo, the head of the rescue agency said.

If the plane is found on the ocean floor, there would be a challenge in getting the plane to the surface because they do not have the "submersible" equipment, Soelistyo said.

The plane's emergency locator transmitter should function automatically and send warning signals, but no signal has been detected by control centers in Indonesia or in neighboring countries, he said.

Jakarta-based Indonesia AirAsia is a low-cost airline and is an affiliate of Malaysian carrier AirAsia, which owns a 49-per cent stake in the airline.

It operates an all-Airbus fleet of 30 A320s on domestic and international routes. The missing plane was just over 6 years of age.

The AirAsia group, including its associates in Thailand, the Philippines and India, has a good safety record since its Malaysian budget operations began in 2002.

"My only thoughts are with the passengers and my crew. We put our hope in the search and rescue operation and thank the Indonesia, Singapore and Malaysian governments," Fernandez said on Twitter.

AirAsia Indonesia has replaced its bright red logo with a grey version on its social media platforms in the wake of news.

The mishap comes at the end of a disastrous year for the region's airlines. Malaysian Airlines lost two aircraft earlier this year.

On 8 March, flight MH370, a Boeing 777 flying from Kuala Lumpur to Beijing with 239 people went missing and has still not been traced.

On 17 July, flight MH17, also a Boeing 777 from Amsterdam to Kuala Lumpur, was shot down above Ukraine killing all 298 people on board.