UltraTech hopes to acquire Binani Cement with backing from lenders

UltraTech has improved its chances of winning the battle for bankrupt Binani Cement as lenders have backed the Aditya Birla Group company's bid, although the creditors group has left the matter for the Supreme Court to decide. 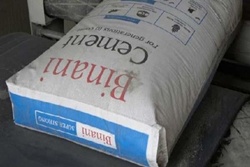 Binani Industries also decided to move the Supreme Court with an appeal to redeem the pledge of its assets in debt-ridden subsidiary Binani Cements Ltd, which would pave the way for an out-of-court settlement with banks for its subsidiary Binani Cement, which is facing bankruptcy proceedings.
With the backing of lenders, Binani Industries will also submit 10 per cent of the offer to prove its commitment, reports quoting a company official said on Sunday.
Creditor banks of Binani Cement have extended conditional support to UltraTech’s bid, seeking indemnity from parent company Binani Industries against any potential litigation by a consortium led by Dalmia Bharat that had been declared the winner with a Rs 6,700-crore offer.
Dalmia Bharat said it would challenge UltraTech’s move to sign an agreement with Binani Industries to buy out the latter’s 98.47 per cent stake in Binani Cement for Rs 7,266 crore after lenders accepted its Rs6,700-cr bid.
“At a marathon meeting on Saturday, lenders decided to give their consent to settle their debt with Binani Industries provided it is approved by the Supreme Court,” said a senior official aware of the development.
“Banks have asked Binani industries to indemnify the financial creditors for all legal liabilities that may arise if Dalmia Bharat moves court against the lenders for an agreement that may happen outside the Insolvency and Bankruptcy Code.”
Binani Industries has deposited Rs750 crore with HDFC Bank to show its commitment to the deal with UltraTech along with a bank guarantee for the remaining Rs6,516 crore. It has said the money will be credited to the account within three days of the deal being approved by the Supreme Court.
The Dalmia Bharat-Bain Piramal consortium is also expected to move the apex court on the grounds that the move by the lenders is illegal as they had won the bid. It may be recalled that UltraTech Cement had moved the court asking lenders to reconsider its offer although 99.5 per cent of them had voted in favour of Dalmia Bharat.
MORE REPORTS