ArcelorMittal, the world's largest steelmaker whose debt has been cut to ''junk'' status in recent months by global credit rating agencies,has  successfully raised $4 billion yesterday in order to reduce the group's debt. 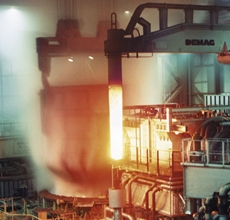 On Wednesday, the steel giant said that it intends to raise $3.5 billion through a combined offering comprising issue of shares and mandatorily convertible notes (MCNs).

ArcelorMittal said it would use the net proceeds from the offering to reduce its debt down to $17 billion by the end of the first half of 2013, keeping in view a medium term target of $15 billion. The company estimates its net debt to be around $22 billion as at the end of 2012.

The group's chairman and CEO Lakshmi Mittal had said, "We have consistently said that reducing net debt is a priority for the company.''

''This transaction, supplemented by proceeds from ongoing asset disposals, the announced reduction in dividends and continued cost saving initiatives, will significantly lower our net debt and accelerate the achievement of a medium term net debt target of $15 billion," Mittal said.