The Number 7 that doomed Samsung's smart phone business could very well be unlucky for Aple Inc's iPhone 7 as well, with a second iPhone getting exploded in a month. An Australian man has now complained that his latest iPhone 7 caught fire inside his car and damaged his car aswell. 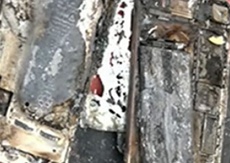 First it was Samsung Galaxy, which was forced to discontinue its Galaxy Note 7s following a series of explosions due to a manufacturing flaw. Now it seems to be the turn of Apple iPhone 7.

An Australian man left reportedly his iPhone 7 in his car while he was at a surfing lesson. Upon returning to his vehicle, he found his car filled with smoke and burned up in the same area where he had placed his iPhone 7.

In a statement to Australia's 7 News, the surfer, Mat Jones, said his iPhone 7 was to blame and shared images with the news outlet, showing the burned remains of his Apple smart phone. His pants, which he had wrapped the iPhone 7 in before heading to his lesson, were still on fire when he got to his car.

''Ash was just coming from inside the pants, which then once you wrapped open the pants, the phone was just melting inside of it,'' Jones told 7 News.

The report comes amid a troubling time for Apple's rival Samsung, which is trying to repair its brand after discontinuing the Galaxy Note 7 after a replacement failed to remedy the earlier defect.

Last month, another Australian had reportedly burnt his legs when his iPhone 7 burst in his back pocket when he fell down from his mountain bike.

Reports said, overcharging and puncturing the device are the main reasons generally that these devices catch fire.

Apple has reportedly said it is aware of the incident and is investigating the issue.

Samsung is still investigating the matter, and said it is offering customers credits on their wireless bills as it tries to reclaim all of the Galaxy Note 7s it sold.

Given the parallel between Samsung and Apple, many in Australia and elsewhere doubt if smart phones are worth buying at all.

However, since Jones himself has acknowledged that he wasn't at the car when his iPhone caught fire, it might be difficult to determine if the iPhone 7 caused the fire or caught fire after the car seat burnt itself.

In a statement to Fortune, an Apple spokesperson said the company was ''in touch'' with Jones and was investigating the matter.