More reports on: In the news, Electronics - consumer

Steve Jobs did not create iPhone, US government did, says Nancy Pelosi

Democratic leader of the US House of Representatives for the 114th Congress, Nancy Pelosi, said that Apple (and Steve Jobs) did not deserve much credit for the iPhone as most of its features were based on federal investment, research and breakthroughs. 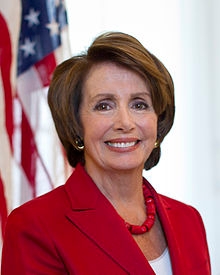 Mashable reported that Pelosi made the remarks during a hearing to help draft the Democratic Party platform, a multi-day event to prepare for the Democratic National Convention in July.

The report further quoted Pelosi, as she held up an iPhone (presumably a 6S or 6S Plus), saying, ''Anybody here have a smartphone? In this smartphone, almost everything came from federal investments and research. GPS, created by the military, flatscreens, LLD [sic , most probably means LCD], digital camera, wireless data compression, research into metal alloys for strength and lightweight, voice recognition - the list goes on and on. They say Steve Jobs did a good idea designing it and putting it together. Federal research invented it.''

The report added how this comment had to be seen in line with Barack Obama's famous 'you didn't build that speech' in 2012 where he proclaimed that no one has built a business on their own, the government played a big part in it.

However, Tim Worstall writing in Forbes magazine disagrees with Pelosi and asserts that Apple and Jobs did indeed create the iPhone. While agreeing that federally funded research money went into the basic technology research which led to components of the iPhone (and many other things) being invented, he says the the iPhone is what we call an innovation, not an invention. He cites economist William Baumol who makes the distinction between invention and innovation as defining innovation as putting the invention to use in a manner that the original inventors did not think of.

''Further, innovation is what entrepreneurs do: look around the society, see what technologies are available, piece them together with available resources and see whether it flies. That is what Apple and Jobs did. And that's innovation and that's also something that governments don't do very well,'' he said.