Apple Inc is expected to sell as many as 20 million watches in the first year, even as the world's most expensive watch from the iPod stable will bring more money for Apple than the iPods and iPhones, say analysts. 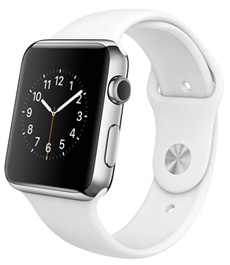 CCS Insight says this will make the Apple Watch, expected in April, "the most successful smart watch ever."

The CCS Insight research report released on Tuesday pegged Apple's watch sales at as many as 20 million in the first year.

That's not saying much, the report points out, as the watches have yet to catch consumer fancy.

Pebble, the first Apple smart watch to launch, has sold 1 million copies in its two years, while watches from Samsung and LG under the `Android Wear' banner sold just 720,000 units in 2014, according to researcher Canalys.

This week LG announced a new "luxury" smart watch, `Watch Urbane,' for release later this year. LG is yet to price it, but the all-metal watch could take on the Apple Watch with a more polished look, say analysts.

Meanwhile, the Wall Street Journal reported that Apple's watch production for the first quarter of this year is on track for 5 million units. Of that 5 million, half are expected to be the less expensive `Apple Watch Sport' which starts at $350, and one third are the stainless steel watch, which could sell for $500-$750, most likely.

That leaves about 850,000 Apple Watch Edition pieces, the more expensive gold model. ''I believe the watch will sell for around $3,000 or less, though let's assume it sells for $4,000 as The Wall Street Journal is hearing, for the purpose of this exercise.''

Assuming a 35 per cent margin on each Apple Watch model on average (conservative), and including extra bands, an average selling price of $400, $650, and $4200 for the Apple Watch Sport, stainless, and Edition models respectively, Wall Street Journal estimates Apple's quarterly revenue from watches to be around $2 billion.