Apple devices cleared for use on US military networks

Apple devices iPhones and iPads have received the nod from Pentagon for use on its networks, clearing the decks for the maker to compete with Samsung Electronics Co and BlackBerry for military sales. 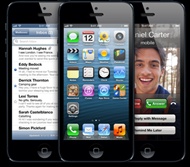 In a statement today, the defence department said it had approved the use of Cupertino, California-based Apple's products running a version of the iOS 6 mobile platform.

The decision would lead to a three-way fight for a market for the turf that has long been the preserve of Waterloo, Ontario-based BlackBerry. On 2 May the Pentagon cleared Suwon, South Korea-based Samsung's devices, as also BlackBerry 10 smart phones and BlackBerry PlayBook tablets.

The Pentagon has so far depended on BlackBerrys that have consistently received federal certification for protecting sensitive data.

The defense department has over 600,000 mobile devices, including 470,000 BlackBerrys, 41,000 Apple products and 8,700 devices running Google Inc's Android operating system, according to the agency. The use of Apple and Android products has, however, largely been restricted to testing, not military networks.

According to Tim Wagner, vice president of Samsung, the largest seller of smart phones for commercial use, the company has worked with the US National Security Agency to create a secure version of Google's Android operating system with multiple layers of software and hardware protection.

With the US Defense Information Systems Agency (DISA) granting approval the DoD can provide iPhones and iPads running iOS 6 to its employees, though employees would be barred from using their own devices on the military network, CNET said citing a DISA spokeswoman.

DISA spokeswoman Alana Johnson said, it did not mean Apple was getting a contract, it just meant that specific operating system, Apple iOS 6, was approved as long as they had that particular operating system.

The defense department late last year said it was opening its exclusive contract with the Canadian company to other device makers. At the time, Pentagon said though it would still use "large numbers" of BlackBerry smartphones, it would also ask other companies to apply for a government contract to provide software capable of monitoring, managing, and enforcing US military security requirements.

DISA, which is responsible for establishing a mobile device management system for the DoD, would likely award contracts to companies in early summer. Actual orders would be tied to identification of specific operational requirements as also available funding, according to DISA.