US court blocks Samsung Galaxy Tab 10.1 sales in the US 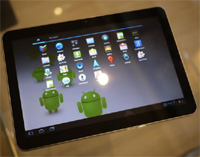 After a string of legal reverses, Apple Inc yesterday won a significant patent battle against its arch rival Samsung Electronics after a US court granted its plea of halting sales of the South Korean company's Galaxy Tab 10.1 tablet in the US market.

That ruling came two days after Samsung won its first patent battle against Apple after a Dutch court ordered the iPhone and iPad maker to pay damages to the South Korean electronics giant over a patent violation in the Netherlands.

Judge Lucy Koh of the US district court in San Jose, California, had in December refused Apple's plea to ban sales of Samsung Galaxy Tab 10.1 tablet and other Galaxy smartphones, (See: Apple fails to block Galaxy sales in US), but a federal appeals court requested Koh to reconsider Apple's request for an injunction.

Koh granted Apple a preliminary injunction on finding that the Galaxy Tab 10.1 to be a lot similar "in the eyes of the ordinary observer" to an Apple patent and "virtually indistinguishable" from Apple's iPad and iPad 2.

The 10-inch Galaxy Tab 10.1 and the iPad have similar designs, slim and nearly identical screen sizes.