Technology giant Apple Inc yesterday won a patent ruling against rival Samsung in Europe's largest markets after a German court backed its earlier injunction of banning the South Korean company from selling its tablet computers in the country. 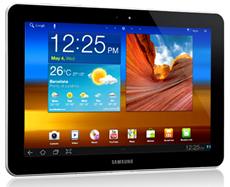 Apple, which stepped up its intellectual property battle  against the South Korean technology giant's flagship Galaxy tablet by filing cases in Germany, the Netherlands, the UK, Australia, the US and yesterday in Japan, got a favourab le ruling from a Duesseldorf court that banned sales  in Germany of Samsung's Galaxy Tab 10.1 tablet PC, a rival to Apple's iPad and iPhone.

But the court disallowed Apple's plea to ban the Galaxy Tab 10.1 in the whole of the European Union despite last month having granted an ex-parte interim judgement banning Samsung from selling it in the European Union except the Netherlands and the UK. (See: Apple granted ex-parte injunction barring Galaxy sales in Europe)

That interim order forced Samsung to pull the new Galaxy Tab 7.7 out of the IFA consumer-electronics show in Berlin last week.

The court ruled that "it could only be competent to order a Europe-wide ban for a firm headquartered outside the European Union if this firm has a German subsidiary," it said in a statement.

Apple took Samsung to court claiming that its rival slavishly copied the design and look of its blockbuster selling iPhone and the iPad 2 on its latest release the Galaxy Tab 10.1 tablet PC.