E-commerce giant Amazon.com Inc said on Friday it would invest $700 million in start-up US electric pickup truck maker Rivian Automotive LLC, in a move to strengthen its logistics network. 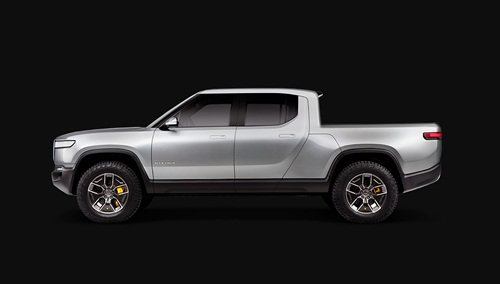 Amazon’s endorsement of Rivian’s electric vehicle technology with potential to reshape the automotive sector is based on the hope Rivian will assist it in its development of delivery vehicles that will bolster its logistics network, reports citing sources familiar with the matter said.
After nine years of design and development, automotive startup Rivian unveiled two new electric vehicles (each with Level 3 autonomy) at the Los Angeles Auto Show in November 2018.
The R1T is a pickup built specifically for off-road adventuring while the swanky R1S is competing with Range Rover's line of upscale SUVs in both looks and amenities.
Both vehicles are built upon Rivian's "skateboard" frame construction, wherein the entirety of the drivetrain and power storage sit even with or slightly below the frame of the vehicle the same way a skateboard's trucks, spacers, wheels and bearings all sit underneath the deck. This, along with the fact that there is no engine or driveshaft (since the motors in each wheel make it AWD), frees up a huge amount of space for designers to work with. The R1T's hood lifts up to reveal 330 liters of cargo space -- in what the company calls the vehicle's front trunk, or frunk -- the rear cargo bed offers nearly two square meters of flat space in which to pack, and a clever cubby hole (dubbed the gear tunnel) hidden under the rear passenger seats that runs the width of the vehicle offers another 350 liters of space for long objects like golf clubs, hunting gear or ski sets.
Reuters reported on Tuesday that Amazon and General Motors Co were in talks to invest in Rivian. GM’s talks with Rivian about an investment are continuing and any deal would be announced at a later date, people familiar with the talks said on Friday.
Rivian could ultimately be valued at between $3 billion and $4 billion, one of the sources said.
The Rivian deal comes as its much larger electric car manufacturing rival, Tesla Inc, struggles to stabilize production and deliver consistent profits as it ramps up its Model 3 sedan, with pricing ultimately aimed at giving it mass market appeal.
Amazon CEO Jeff Bezos is reported to have personally approached Rivian founder and CEO RJ Scaringe last summer to express interest in an investment. Amazon has since invested $530 million in self-driving car startup Aurora Innovation Inc.
Amazon is looking for deals that can speed packages to shoppers’ doorsteps regardless of spikes in consumer demand or shortages of delivery personnel. Last year, Mercedes said Amazon had become the biggest customer of its Sprinter vans, securing 20,000 vehicles for delivery contractors.
Rivian has raised $450 million in capital and debt financing from investors, including Sumitomo Corporation of Americas.
The company has grown and changed since it launched almost a decade ago in Florida under the name Mainstream Motors. Rivian, a name it adopted in 2011, is no longer in Florida, and it’s much bigger these days. The company has about 600 employees split between four development locations in the US and an office in the UK. The bulk of its employees, about 300, are in Michigan to be close to an expansive automotive supply chain.
The company also has operations in San Jose, California and in Irvine, California, where engineers are working on autonomous vehicle technology. Rivian purchased in 2017 the Normal, Ill. factory, which was where Mitsubishi in a joint venture with Chrysler Corporation called Diamond-Star Motors produced the Mitsubishi Eclipse, Plymouth Laser and Dodge Avenger, among others.
About 65 employees work at the 2.4 million-square-foot facility, which is currently being converted to accommodate Rivian’s needs.
Rivian aspires to be the first to produce a mass market electric pickup. It intends to begin selling its R1T by the end of 2020.
MORE REPORTS