Delivery drivers are being asked to drop off up to 200 Amazon parcels a day while their packed schedules force them to skip rest breaks and urinate in bottles even while earning less than the minimum wage, a UK study claims. 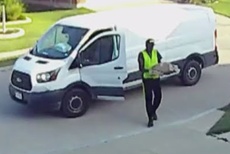 Many routinely exceed the legal maximum shift of 11 hours and finish their day dead on their feet, an investigation by the Sunday Mirror has found.

Some have said they often break speed limits to complete routes because their delivery targets take no account of traffic or other road conditions such as ice or road closures.

Many claim they are employed in a way that means they have no rights to holiday or sickness pay. And some say they take home as little as £160 for a five-day week amid conditions described by one lawyer as ''almost Dickensian''.

The Driving and Vehicle Standards Agency has vowed to investigate after drivers contacted them to complain about conditions. And a legal firm, which led the case against taxi giant Uber is also representing seven drivers who say agencies used by Amazon are mistreating them.

Amazon notched £7.3 billion in UK sales last year, on which it paid £7.4 million in tax.

The delivery giant does not employ drivers directly but uses an army of agencies instead. These agencies recruit drivers who work via an Amazon app and follow a delivery route set by the company.

Due to deductions for van hire and other expenses, some drivers earn less than the national minimum wage.

Now many of those carrying out the deliveries are so concerned by the job they are asked to do that they are blowing the whistle on standards.

Their claims are a world away from Amazon's slick Christmas ad campaign, in which boxes are shown zipping around a spotless warehouse to the tune of Supertramp's hit Give a Little Bit before going off on a ''magical adventure''.

A number of drivers from Prospect Commercial Ltd, a Kent-based company which operates across the UK, raised concerns about the work they do from Amazon's Sheffield depot. They say they earn a fixed rate of £103 a route each day, while being offered van hire and insurance costing £200 a week.

They claim they are working as long as 12 hours each day, sometimes as much as 14 – despite UK law dictating that drivers must not be on duty for more than 11 hours in any working day. One 50-year-old worker told the Mirror he took home just £160 after forking out for van costs plus £140-worth of fuel, reimbursed later at 16p per mile.

But agency workers denied the system allowed for traffic jams or factored in time for breaks. Steven Eckett, head of employment at solicitors Meaby and Co, said, ''These workers deliver Amazon packages, collected from an Amazon depot and are given a route designed by Amazon. They are Amazon workers in all but name.

''But Amazon are trying to distance themselves from the workers to circumvent employment law. This needs to be challenged.''

The speed at which drivers must go to hit targets has prompted many to contact the DVSA, which is also investigating claims they are exhausted and have to urinate in bottles.

One worker told the paper, ''Amazon sent an email to all managers to try to stop drivers carrying bottles filled with urine. The security guards were reporting people for it. But the allocation and number of stops, and the volume to be distributed for any given day, lie entirely with Amazon.''

Employment law specialist Nigel Mackay has laid out a raft of employment complaints and claimed the workers are ''mislabelled'' as self-employed so bosses can deny them rights. And a leading union has called on Amazon's US founder Jeff Bezos, 53, the world's richest man who last year made £1.6million an hour, to do more to support agency workers.

Maria Ludkin, legal director of the GMB union said: ''Employers might not like paying the minimum wage or giving their workers the protections they're entitled to in the workplace, but it's not optional. We don't get to pick and choose which laws we adhere to and which we don't like.''

An Amazon spokesman told the Sunday Mirror, ''Over 100 businesses across the UK are providing work opportunities to thousands of people delivering parcels to customers. We are committed to ensuring that the people contracted by our independent delivery providers are fairly compensated, treated with respect, follow all applicable laws and driving regulations and drive safely.

''Our delivery providers are expected to ensure drivers receive a minimum £12 per hour before deductions and excluding bonuses, incentives and fuel reimbursements."

An Amazon spokesman added, ''As independent contractors of our delivery providers, drivers deliver at their own pace, take breaks at their discretion, and are able to choose the suggested route or develop their own.''

A spokesman for Prospect Commercial Ltd said, ''We work hard to provide a good service and supportive work environment for our self-employed contracted drivers.

''We provide competitive compensation to contracted drivers, who receive a rate in excess of the national living wage after deductions, and this is regularly audited.''