American ecommerce giant Amazon has unveiled its largest fulfilment centre (FC) in the country at GMR Hyderabad Airport City at Shamshabad on Thursday, ahead of the festive season. 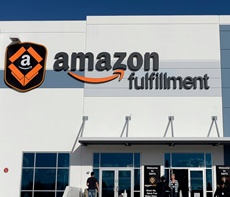 Amazon, which entered India in June 2013, now has 41 FCs across 13 states with a total storage capacity of 13 million cubic feet.

''Our vision is to transform the way India buys and sells. At Amazon, we have been consistently investing in our infrastructure and delivery network, so we can increase our speed of delivery and provide a superior experience to both customers and sellers.

''With the launch of our largest fulfilment centre in Telangana, we will be able to better serve our customers with one-day and two-day deliveries. The FC will enable sellers to use local infrastructure, save capital and help them grow their businesses.'' Akhil Saxena, vice-president, India customer fulfilment at Amazon India said.

While Amazon refused to share investment figures for the FC or the total employment it would generate, The Financial Express put the investment at over Rs1,000 crore, while company officials said the FC would have at least 1,000 people working in it at any given point of time.

''The fulfilment centre will work closely with local communities, create numerous skilling and employment opportunities for thousands of youth. With more than 10,000 sellers in Telangana, the selection offered by sellers in the state for immediate delivery has grown more than 120 per cent compared to last year,'' Akhil said.

The three-storey facility has 51 loading and unloading docks that can handle around 1,000 trucks per day , 69 km of fire hydrant piping, more than 500 km of five types of cables, over 15,000 fire sprinklers and a 1.6-km long conveyor belt to move packages, Amazon said.

Saxena termed the opening of the FC as an important milestone for Amazon, which has grown from one FC at Bhiwandi in Maharashtra in 2013 to 41 centres and from 100 sellers in two categories to 2.25 lakh sellers in just four years.

Pointing out that the ecommerce giant has not just invested in fulfilment centres in Telangana, but also has two sort centres and 50 delivery stations, Saxena said a lot of the packaging being used now is being sourced locally.

GMR Hyderabad International Airport Ltd chief executive S G K Kishore said the FC was set up in a record time of six months and would serve as a major booster of investor sentiment not just for the Hyderabad Airport City but also Brand Hyderabad and Brand Telangana.

Amazon also has FCs at Medchal (80,000 sq ft dedicated big appliances facility), Tolichowki and Kompally. Amazon will also be setting up its largest tech development centre outside of its Seattle headquarters at Hyderabad.