US e-commerce giant Amazon.com Inc yesterday struck a deal to buy Dubai-based online retailer Souq.com FZ for an undisclosed sum in order to gain a footprint in the high-growth Middle East market. 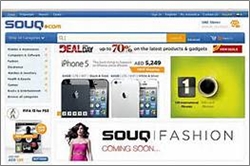 The deal was finalised a day after a state-backed firm disclosed an $800-million counter offer from Dubai billionaire Mohamed Alabbar's Emaar Malls.

Amazon.com is reported to have paid a little less than Souq.com's $1-billion valuation when it sought funding last year.

Souq.com, backed by investors Tiger Global Management and South Africa's Naspers Ltd, had hired Goldman Sachs Group in September 2016 to find buyers for a stake in the company.

Founded in 2005 by Ronaldo Mouchawar as an auction site linked to internet portal Maktoob, Souq.com is often described as the Amazon of the Middle East.

In 2009 Yahoo! acquired Maktoob, but Souq.com, which was not included in the sale, was spun off as part of Jabbar Internet Group.

It is the largest e-commerce platform in the Arab world offering more than 400,000 products such as consumer electronics, fashion products, and household goods.

It attracts over 24 million unique visits per month and sells more than 1.5 million products online to customers in the United Arab Emirates, Egypt, Saudi Arabia, Kuwait, Bahrain, Oman, and Qatar.

After discussions stalled in January over the price demanded – nearly $1 billion – Amazon came around once again to explore the opportunity (See: Amazon set to fully acquire UAE's Souq.com at $1 bn valuation ).

Also part of the initial discussion was Indian unicorn Flipkart, which also opted out of the deal.

In the running until much later were other prominent entities, like the mall operator Majid Al Futtaim, which also eventually pulled out of the race after being outbid.

Upon taking over Souq, Amazon faces the most formidable threat from noon.com, which is also worth $1 billion, and was set to launch in January housing 20 million products, but has faltered on its timeline and is yet to go live.