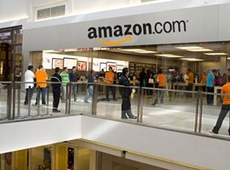 It already sells electronics accessories and home goods such as bed sheets and knife sets under the Amazon Basics brand.

These items will be traded under new Amazon brands such as Happy Belly, Wickedly Prime and Mama Bear,

The private label means the items are likely to be cheaper. More than that, these products also bring in more profit because they allow companies to save costs on marketing and brand development.

The products, however, will only be available for purchase by Amazon Prime members who subscribe to the company's $99/year membership program, reported the Wall Street Journal.

According to Consumer Intelligence Research Partners, a market research firm, there were 54 million Prime members in the US at the end of 2015, converting in to 21 percent of the US adult population.

Prime members spend on average about $1,100 per year on the site, compared to about $600 per year for non-members.

Happy Belly would be the brand for nuts, spices, tea and cooking oil. Wickedly Prime will be the name for snacks, while Mama Bear would be the name used for baby food and diapers. Detergents and home goods would fall under the Presto! name.