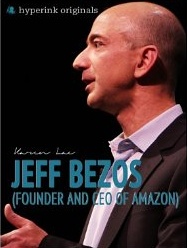 Clearly gung-ho about India, Amazon boss Jeff Bezos on Sunday made maximum drama on the first day of his visit.

Showing that he has been quicker than most westerners to grasp the country's penchant for dramatic gestures, Bezos carried out a road-show on a colourfully painted supply truck which rode through Bangalore and ended at a shopping mall in Bangalore, flashing a big $2-billion cheque. Of course, the media was gushing.

In July this year, Amazon said it would invest $2 billion (over Rs12,000 crore) in India to expand business, a day after its largest Indian rival Flipkart announced that it would increase its capex by $1 billion (See: Amazon to outdo Flipkart with fresh $2-bn investment in India).

Amazon, which launched its online marketplace in India last year, sees huge potential in the Indian economy and for the growth of e-commerce.

Apart from smaller e-commerce portals, Amazon competes head on with Flipkart and Snapdeal. In the past few months it has raised the bar with introducing same-day delivery and ramping-up its logistics among others.

But Bezos, in interactions and interviews with various sections of the easily awe-struck Indian media, said he never bothers about local competition. ''Throughout my Delhi drive-through, I did not see a single FlipKart poster,'' was his comment, signalling aggressive growth plans in the country.

The India arm of Amazon.com, the $75-billion US-based e-retail giant, will look to explore the tremendous business opportunity in India's 35 million small and medium enterprises and devise India-specific innovations.

Amazon entered the $3.1-billion Indian e-commerce market in June last year, and probably hopes to up the ante against its biggest home-grown rival Flipkart.

The $2 billion, according to Bezos, will be spent on building performance centres, upgrading logistics services, and developing the mobile platform as well as new tools and techniques to help the small and medium businesses.

''There are unique opportunities in India. One of the things that is very unusual about India is the number of small and medium size businesses that you have. We want to make it easy for small and medium businesses to reach out to customers in this digital economy,'' Bezos told said.