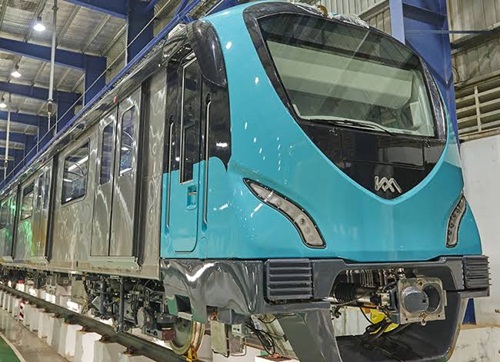 The ceremony was preceded by Mr. Alain Spohr – MD, Alstom India & South Asia.
A total of 31 metro train sets comprising of 248 cars will be manufactured under the ‘Make in India’ initiative. Alstom will deliver the first metro train for MMRC after tests by November 2020.
Alstom’s overall contract with MMRC for Line 3 is worth €452 million. The order includes manufacturing of 31 lightweight, fully-furnished modern metro trains of 8 cars each.
Along with rolling stock, Alstom will also execute the power supply contract and equip Line 3 with Urbalis 400, its latest generation of CBTC signalling technology. The scope of the signalling contract includes unattended train operation (UTO), computer-based interlocking and centralised train supervision; an integrated telecom solution comprising of CCTV, passenger information, passenger announcement and Giga bit network; platform screen doors, as well as the electrical and mechanical supervisory control and data acquisition system (E&M SCADA), Alstom stated in a release.
“This will be the new face of transportation for the commercial capital of India. Mumbai is a global city and it is set to get a world-class metro experience. The train sets are custom-designed for Mumbai. Themed on Dynamic Fluidism that takes inspiration from the city, the train prioritises high interior density layout to maximise space efficiency. The train sets will be able to accommodate at least 3000 people on a single trip, easing daily commute for Mumbaikars,”  Alain Spohr, managing director of Alstom India and South Asia, said.
The factory is currently executing orders for Chennai Metro, Montreal Metro (Réseau Express Métropolitain) and Mumbai Metro Line 3.
“Alstom recently won a contract with Sydney’s NRT to supply the rolling stock and signalling system for the next stage of Sydney Metro. 23 six-car fully-automated Metropolis trains for the project will be manufactured at our SriCity facility,” he added.
The Aqua Line train sets will feature a host of safety elements, including CCTV cameras, smoke detectors, emergency intercoms, fire extinguishers with wider detrainment doors to quickly evacuate passengers in case of an emergency.
The inclusive design of train sets will serve to the differently-abled individuals with ease of travel and includes dedicated space for wheelchair in every car. The overall exterior and interiors of the train set are inspired by the undying energy of Mumbai and its people who are always on the move and hustle all day long.
Alstom will also train maintenance and operations staff for the project. It is also the first time that any metro train in India will have 75% motorization, enabling quick acceleration and deceleration thereby bringing about greater efficiency in operations. The trains will also be equipped with regenerative braking system aiding significant reduction in carbon emissions. In addition to the above features, it is the first UTO (Unattended Train Operation) project in Mumbai.
MORE REPORTS