In what could be one of the largest orders in commercial aviation history, Air India Ltd is considering ordering as many as 300 narrowbody jets, as the new owners, Tata Sons, looks to overhaul the formerly state-run airline’s fleet, reports citing people familiar with the matter said on Monday. 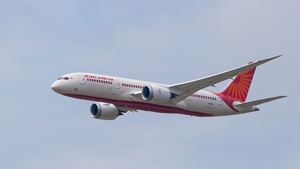 The carrier may order Airbus SE’s A320neo family jets or Boeing Co’s 737 Max models, or a mix of both, according to unconfirmed reports. A deal for 300 737 Max-10 jets could be worth $40.5 billion at sticker prices, the reports added.
An order of this size could be a big boost to loss-making Boeing, which lags far behind European rival Airbus. Currently, IndiGo, operated by InterGlobe Aviation Ltd, is the world’s largest customer for the narrowbodies, ordering more than 700 European manufacturer’s best-selling aircraft.
Other Indian carriers, including Vistara, Go Airlines India Ltd and AirAsia India Ltd fly planes from the same family.
Airbus builds about 50 narrowbody jets in a month. It has plans to increase production to 65 jets by the middle of 2023, and to 75 by 2025. Even at 75 a year, production and delivery of 300 planes would take years, considering Airbus’s overall order levels.
Tata Group, Air India’s owner, is also close to an order for Airbus A350 long-range jets that are capable of flying as far as the US West Coast from New Delhi, according to a Bloomberg News report. The debt-laden Indian flag carrier still has lucrative landing slots at most major airports, but faces competition from foreign airlines with nonstop services to India.
A new fleet acquired under favourable terms and with long-term maintenance service offers, would help the airline cut costs and compete better with rivals that offer very cheap fares.
Reviving Air India will be a big challenge for the Tata Group. Any suc­cess will be a long, com­pli­cat­ed process that could cost more than $1bn and re­quire fix­ing myriad prob­lems.
Tatas bought the airline earlier this year in a $2.4bn deal, in what is seen as the most high-profile privatisation under Prime Minister Narendra Modi. The sale is a win for PM Naren­dra Modi, who has em­barked on a bold pri­vati­sa­tion plan to plug a widen­ing bud­get deficit.
An order for new planes, especially with favorable terms on long-term maintenance, would help it cut costs and compete better with rivals that offer very cheap fares.
Tata Group, which now owns four airline brands, is expected to consolidate its aviation businesses with Air India under its fold.
MORE REPORTS