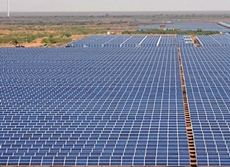 With 648 MW of generation capacity located in a single location, it grabs the title of the world's largest single solar power plant from the Topaz Solar Farm in California, which has a capacity of 550 MW.

The project involved an investment of around Rs4,550 crore.

The plant is part of the state government's ambitious yet highly achievable target of generating 3,000 MW as per its new solar energy policy unveiled in 2012.

Adani sourced equipment and machinery from various parts of the world to set up the entire 648 MW within a record time of 8 months.

A total of around 8,500 personnel worked day and night set up an average of 11 MW of installation capacity per day to set up the plant in the stipulated time.

Speaking on the achievement, Gautam Adani, chairman, Adani Group said, ''This is a momentous occasion for the state of Tamil Nadu as well as the entire country.  We are extremely happy to dedicate this plant to the nation; a plant of this magnitude reinstates the country's ambitions of becoming one of the leading green energy producers in the world. I would like to express our deepest gratitude to the Hon'ble chief minister and the government of Tamil Nadu for their valuable support and guidance in achieving this gigantic feat''.

''Adani Group is in a phase of revolutionising the renewable energy ecosystem of India by building solar power plants, solar parks and manufacturing facilities with seamless integration. Setting up of the 648 megawatts (MW) solar power plant in Tamil Nadu is a step in this direction'', Adani Green Energy stated in a release.

The new plant has helped raise India's total installed solar capacity to over 10 GW, but is far off the country's target of 100 GW green energy generation by 2030.

By 2022, India aims to power 60 million homes with energy from the sun. The government's goal is to produce 40 per cent of its power from non-fossil fuels by 2030.

With continuous additions to solar power capacity, India is expected to become the world's third-biggest solar market from next year onwards, after China and the US.