A combine of Adani Gas and state-run Indian Oil Corp and gas supplier GAIL are among nearly a dozen firms that have bid for licenses to retail CNG (compressed natural gas) and piped cooking gas in 14 Indian cities including Bengaluru and Pune, according to a report. 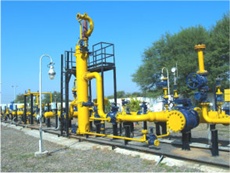 In all 44 bids were received, with Bengaluru (Bangalore) being the most sought-after and Andhra Pradesh / Telengana faring poorly.

Bengaluru got eight bids from firms like Adani-IOC, GAIL Gas, GSPC, HPCL and BPCL while Pune got two bids from Mahesh Infra and Maharashtra Natural Gas Ltd, they said,.

Bids for the latest round of City Gas Distribution (CGD) licences were originally due on 11 February but Petroleum and Natural Gas Regulatory Board (PNGRB) in January extended the deadline to 12 May 12. On 23 April, it extended bid deadline to July 10 and last month it further pushed it back to 11 August.

Bidders had been asked to quote the tariff they will charge for the pipeline network to be laid in the city and the compression charge for dispensing CNG (compressed natural gas) over the next 25 years.

They are also asked to quote the inch-kilometre of steel pipelines they will lay during first five years and the number of domestic consumers proposed to be connected by piped natural gas, according to the regulator.

The cities offered for bidding include those that PNGRB had offered in the fourth CGD round in September 2010. The regulator had, however, cancelled the round in November 2011.

In the fourth round, licences for Ernakulam in Kerala; Rangareddy / Medak, Nalgonda and Khammam in Andhra Pradesh; Alibag / Pen and Lonavala / Khapoli in Maharashtra; Guna in M and Shahjahanpur in UP were offered.

The current round is being called 4th round of CGD bidding, PNGRB said in the notice inviting bids.