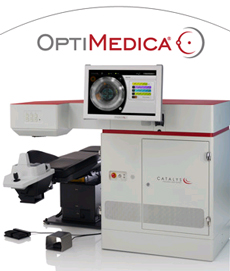 The acquisition will allow Abbott to expand its vision care business into the femtosecond laser-assisted cataract surgery market.

Currently, most cataract procedures are performed manually, with the surgeon making incisions into the eye by hand.

OptiMedica's Catalys Precision Laser System is designed to allow surgeons to replace some of the technically demanding manual steps in cataract surgery with a precise, computer-guided, femtosecond laser technology.

A femtosecond laser can be used to make a variety of incisions during ocular surgery.

The Catalys laser system has been approved in Europe as well as by the US Food and Drug Administration.

Abbott said the global demand for vision care is on the rise, as the worldwide population ages and the emerging middle class grows in developing nations. Nearly 22 million cataract surgeries will be performed globally in 2013.