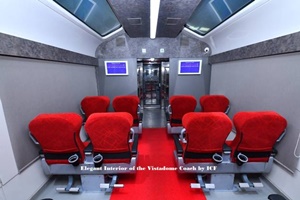 Vistadome coaches are new design tourist coaches, meant for operation in mountain railways and are specially designed to make train journeys scenic and memorable. The coaches also give a boost to tourism.
According to the railway ministry, the new Vistadome tourist coaches have technologically-advanced features for improving passenger comfort that are comparable with European standards.
The Vistadom tourist coach is provided with larger windows on the sides and have glass panels on the roof of the trains. and 44 seats for passengers with rotation up to 180 degrees to face the direction of train movement. The coach is also having Wi-Fi-based passenger information system.
These coaches are being operated on selected routes on the Indian Railways network, including the Darjeeling Himalayan Railway, Nilgiri Mountain Railway, Kangra Valley Railway, Kashmir Valley, Kalka-Shimla Railway, Matheran Hill Railway between Dadar in Mumbai as well as Madgoan in the Araku Valley.
The premium vistadome coaches provide glass observation lounge as they are fitted with wide windowpanes and a roof of switchable glass that becomes either transparent or translucent with just the click of a switch. Among other features, the vistadome coach also has a GPS-based information system and toilets along with ceramic tile flooring. These air-conditioned, aesthetically deisgned tourist coaches are the first-of-its kind to operate on the Indian Railways network. The coaches also have double-wide reclining passenger seats which can be rotated by 360 degrees for catering to passenger's sightseeing experience.
During the last few years, Indian Railways has taken huge steps to add  muscle to the government’s Atma Nirbhar Bharat Mission. The results are visible on all fronts, including the quality of engines, coaches, tracks and signalling systems. All these go a long way in making transformational changes in the quality travelling experience of the citizens of the country, a railway ministry release stated.
MORE REPORTS