Rail minister Bansal seeks to distance self from nephew's bribe-taking 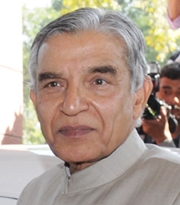 Railway minister Pawan Kumar Bansal today sought to distance himself from his bribe-taking nephew V Singla, who was arrested by the Central Bureau of Investigation (CBI) in Chandigarh on Friday for accepting Rs90 lakh from a senior railway official seeking a more lucrative posting.

Denying any involvement, Bansal said that he has no business relations or financial transactions with his nephew.

Bansal said he had always followed utmost probity in public life, and he looked forward to an expeditious CBI inquiry into the matter.

Senior CBI officials said on Friday that Singla, son of Bansal's sister, was arrested at an upcoming mall in Chandigarh for accepting the money from one Manjunath, an alleged middleman for Railway Board member (staff) Mahesh Kumar.

Kumar was arrested at the Mumbai airport soon after he arrived from Delhi. He apparently wanted the position as member (electrical), which becomes vacant on 1 July.

''The new post would have given him the power to influence advanced signalling and telecom contracts worth Rs2,300 crore,'' a CBI officer is reported to have said.

The deal with Singla was allegedly for Rs2 crore, with Rs90 lakh as the first installment. The CBI has seized the cash.

The Railway Board is the highest decision-making body of the Indian Railways.

Manjunath, who appeared to have ''mobilised the money'' on behalf of Kumar, has also been named by the CBI in the first information report along with one Sandeep Goyal.

Mahesh Kumar was elevated to the Railway Board as member (staff) just a day earlier on Thursday. He is in charge of administration, human resources and recruitment – a post that should be lucrative enough, with plenty of scope for patronage. But, apparently, he was willing to pay Rs2 crore for a post where he could collect even bigger bribes with impunity.

Singla is in the realty business, with interests in Chandigarh, Mandi Gobindgarh, Derabassi and Delhi. A CBI team tried to search his home in Chandigarh after detaining him at the mall, but met with outright hostility.

Apart from showing up the deep rot in the railways – a critical part of India's infrastructure – the incident also makes one wonder how a nephew of the minister could hope to collect Rs2 crore without any direct connection with the railway ministry.

It casts doubts on Bansal's protests of innocence; and the opposition has been quick to seize on this angle to disrupt Parliament and demand the minister's resignation.

But the opposition is too shallow to ask the deeper question – if this is the level of rot in the railways, what are the chances for a genuine upgrade of India's infrastructure?

The government may make all kinds of noises about improving sectors like power, roads, mining, and so on; but as long as these remain under the control of corrupt governments, India will probably be stuck with a GDP growth of around 7 per cent at best for a long time to come.