The largest oil marketing company in the country Indian Oil Corporation has begun home deliveries of diesel, a first of its kind service in the country. 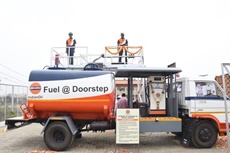 The service has started with Pune, IOC plans to roll it across the country soon. It may also consider delivering petrol later. This move is aimed at reducing long queues at fuel stations.
The petroleum ministry had announced plans for doorstep delivery of auto fuels in April 2017 (See: Govt proposes online sale of petrol and diesel for home delivery).
The move has been approved by Petroleum and Explosives Safety Organisation (PESO).
IOC said diesel for doorstep delivery is more suitable and safer to carry and transport. He had further stressed that delivery of petrol has its own risk and all Oil companies are working with PESO on this.
The Financial Express reported, in June 2017 Bengaluru based start-up, ANB fuels had started a similar service of home delivery of petrol and diesel under MyPetrolPump branding. However, PESO then issues a circular to oil companies to stop the supply of fuel to ANB, stating the fuel transportation service as an unsafe practice.
MORE REPORTS