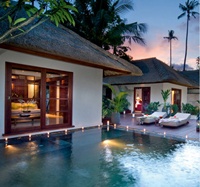 In October 2012, Indian Hotels, which held a 6.9-per cent stake in Orient Express, teamed up with Charme II Fund, an Italian fund managed by Montezemolo and Partners SpA, to table a $12.63-per share bid.

Bermuda-registered Orient Express, which  owns or has stakes in about 33 luxury hotels in 25 countries, six tourist trains and three river cruises, had rejected the bid saying that the unsolicited offer undervalued the company and in its opinion it was a highly disadvantageous time to sell (See: Orient Express rejects Indian Hotels' takeover bid).

Shares in Orient-Express, majority held by investment companies and hedge funds, have fallen by nearly 78 per cent from its peak of $64.80 in October 2007 before the onset of the global financial crisis.

The stock closed yesterday in the New York Stock Exchange at $14.76, giving it a market cap of $1.8 billion.

It was the second time that Orient Express management had rebuffed  Indian Hotels. The first time was in 2007 when the owner of the Taj Mahal Palace Mumbai sought to raise its stake but failed due to stiff opposition from the then Orient-Hotels management (See: Orient-Express turns down Taj group overture).

Activist shareholders of Orient Express forced a meeting of the company's shareholders to vote to cancel the powers of the promoters to veto hostile bids to take over the luxury hotel chain, a move that was widely interpreted as a precursor to a possible hostile bid by the Tata Group company (See: Tata Group may gain as Orient Express votes on annulling promoters' veto powers).

Indian Hotels had acquired up to 11.5 per cent in Orient-Express for around $260 million in September 2007, which came down to 6.9 per cent due to an expansion in the luxury hotels group's equity capital.

Indian Hotels, the country's largest hotel and resort operator, yesterday said that its board decided not to pursue the offer ''after taking into account all factors, the current economic environment as also other opportunities and priorities for the company.''

Shareholders of Indian Hotels have greeted the ending of the bid for Orient-Express, which would have added to the company's then debt of Rs3,800 crore, as it was willing to take on Orient-Express' debt of about $530 million or Rs2,800 crore) post acquisition.

Consolidated net loss of the company after taxes, minority interest and share of profit/loss in associates stood at Rs57.49 crore for the corresponding period of previous fiscal, the company said in filing with the BSE.

Consolidated total income of the company, however, rose to Rs895.92 crore for the quarter from Rs813.80 crore in the year ago quarter.