The markets have reacted strongly to Idea Cellular's first quarter financial results with the share price of all three major telecom stocks gaining over five per cent each. 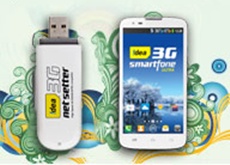 Idea Cellular has outperformed market expectations by reporting a strong set of financials in the first quarter ended 30 June 2014 (1QFY15). The total revenue grew 15.6 per cent, decently above the consensus estimate of 11-12 per cent.  Net profit grew at 57.4 per cent, a robust performance that was more than twice the estimated 28 per cent rise expected by analysts (See: Idea Cellular posts 57.4 per cent rise in consolidated net profit).

The company has set a strong benchmark for the top two telecom giants, Bharti Airtel and Reliance Communications (R Com).

Analysts expect telecommunication service providers to post a decent show for Q1FY2015, aided by volume sustainability and improvement in realisations.

They expect a good set of numbers from Bharti Airtel with an estimated year-on-year net profit growth between 65 and 90 per cent.

On the other hand they are very cautious about R Com's performance in Q1FY15, and expect a flat to 3 per cent rise in revenue and 30-70 per cent decline in net profit.

Idea Cellular had fired on all cylinders in Q1FY14, with strong revenue growth, EBITDA margins crossing the 30-per cent mark for the first time for a stand-alone entity, increase in revenue per minute and strong net profit growth of 110 per cent, including dividend income of Rs362 crore. The growth in net profit, excluding dividend from the Indus joint venture, is at 58.9 per cent, and 57.4 per cent when cosolidated with Indus.

The revenue form mobile data (2G & 3G) increased sharply by 85 per cent over Q1FY14 on account of rise in users.