The world's seventh largest automaker, Fiat Chrysler Automobiles NV (FCA), has announced the launch of its first Jeep brand after the merger of the two companies in August 2014. 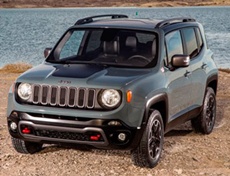 The new brand, Jeep Renegade, is a small crossover built in Italy that would start reaching US showrooms in March, with the for the entry-level Sports model priced $17,995, and an additional $2,000 for an all-wheel drive.

According to commentators, a key strategic element of FCA's push to reach the front ranks of the global auto business was its expansion of Jeep, a brand known from Rio de Janeiro to Shanghai that failed to perform to its potential under previous Chrysler managements.

FCA said a few weeks ago in Detroit its global sales of its Jeep-branded vehicles' in 2014 crossed 1 million, up from 337,716 in 2009, when Chrysler Group LLC filed for bankruptcy. The company now expects FCA Jeep sales worldwide to almost double to 1.9 million in 2018.

The Renegade is powered by the Fiat Chrysler's corporate 1.4L MultiAir turbocharged I-4 engine, delivering 160 hp and 184 lb-ft of torque in this application.

The base engine came paired exclusively to a six-speed manual transmission, while the optional 2.4L ''Tigershark'' I-4 came with the standard with a nine-speed automatic transmission which  produces more power (180 hp) but slightly less torque (175 lb-ft) than the turbocharged MultiAir.

Renegade would compete in the US against models like Kia Soul, Chevrolet Trax and Nissan Juke, Honda's new HR-V, which will soon go on sale.

In Europe FCA had already expanded to 2 million units annually and was growing still. In the US the category had broken from the larger compact crossover segment that included slightly larger models like the Ford Escape and Toyota RAV4 – a two million-unit segment that grew 14.5 per cent last year in a market that rose about 6 per cent.