Japanese carmakers Honda, Maruti Suzuki and Toyota are aggressively resorting to a price war as they seek to push up sagging sales in India, following a fall in sales for the first time in 30 months in July. 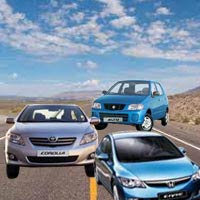 Honda Siel, which cut Rs66,000 off its flagship City sedan last month, is set to launch a new version of its Jazz hatchback with a much more customer-friendly price tag, which according to dealership sources could be around Rs6 lakh, or over Rs1 lakh less than the previous model that was sold out last month through a huge discount offer.

Maruti Suzuki too is in the process of launching a new version of its popular premium hatchback Swift with several added features. This would include variable valve timing (VVT) for added power in the petrol engine, fibre fuel tank for lighter weight, tilt steering and indicators on side mirrors in the new version that also offers extra legroom for its passengers.

The new changes in the specs are designed to give it added punches to take on the likes of Polo and i20 that boast more features than the outgoing Swift. The car is due to be launched on 17 August, but the company is largely holding the price line.

Toyota's entry-level Etios sedan has already been introduced along with the Liva priced at Rs3.99 lakh. Liva is priced much cheaper that its competition like  Maruti Swift and Skoda Fabia.

According to some analysts, the market has seen some rapid changes following Toyota's killer pricing of its new Etios, and then Honda following suit with its hot selling cars. They say now Maruti is expected to bring its top-line cars very aggressively.

Meanwhile, dealers say Japanese automakers are now providing unprecedented support by speeding up delivery after recovering from the earthquake and Tsunami of March this year and offering price cuts to preserve or increase their market share.

Domestic car sales are estimated to have dipped 10 per cent year-on-year in July, in the first fall since January 2009, as increasing overall inflation, rising loan interest rates and fuel prices impacted consumer sentiment. Maruti Suzuki, Hyundai and Tata Motors-which together account for three fourths of all cars sold in the country saw their sales drop in double-digit percentage.