White Sands, NM:  The Raytheon Company said Saturday its Standard Missile-6 had completed a fresh round of tests which validated the extended-range anti-air warfare missile's airframe and autopilot performance. 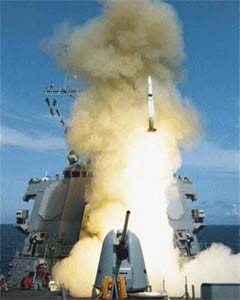 It said a series of pre-programmed manoeuvres pushed the SM-6 missile to the limits of its performance, allowing the US Navy to gather vital simulation validation data.

"The technology that was proven in this test will provide the Navy with the weapon system it needs for outer and area defense to defeat current and future missile threats," said Louis Moncada, Raytheon Missile Systems' director of the SM-6 programme. "This control test vehicle launch is the fourth test of the SM-6 following two guided test vehicle launches in 2008 and the recent advanced area defense interceptor test in May."

The SM-6 still utilises the legacy Standard Missile airframe and propulsion elements, even as it incorporates advanced signal processing and guidance control capabilities of Raytheon's advanced medium-range air-to-air missile. Raytheon said the merger of these two proven technologies allows SM-6 to use both active and semi-active modes.

87-year old Raytheon Company, with 2008 sales of $23.2 billion, provides state-of-the-art electronics, mission systems integration and other capabilities in the areas of sensing; effects; and command, control, communications and intelligence systems, as well as a broad range of mission support services. It is headquartered in Waltham, Massachusetts.