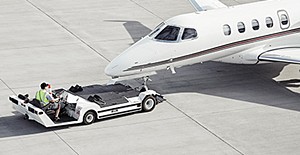 BBA, the biggest operator of business jet services facilities in the US, will fund the proposed deal through new debt facilities and a fully underwritten rights issue of 562,281,811 new ordinary shares at a Rights Issue price of 133 pence, raising approximately £748 million.

The London-based company expects to achieve about $35 million in savings from the merger by the end of December 2017 through job cuts, joint purchasing and rebranding.

Carlyle acquired Landmark Aviation in 2012 from GTCR and Platform Partners for a reported $700 million.

A FBO is a commercial business granted the right by an airport to operate on the airport and provide aeronautical services such as fueling, hangaring, tie-down and parking, aircraft rental, aircraft maintenance, flight instruction, etc.

Landmark is an integrated aviation service provider offering end-to-end support services to Business and General Aviation customers. After Signature, Landmark is one of the largest FBO networks in the world with 68 locations, of which 64 are in North America and 4 in Europe.

The Houston-based company owns high quality assets with a presence at four in the top five and 14 in the top 50 US airports.

Signature is the world's largest leading FBO network with 133 FBO locations of which 79 are in North America.

The proposed deal will increase Signature's network to 133 locations in North America and 189 locations in total.