Even as the dust from the flying ban on Shiv Sena MP Ravindra Gaikwad for misbehaving with an Indian Airlines official is yet to settle, another instance emerged on Friday of an MP acting high-handed with AI staff and delaying a flight. 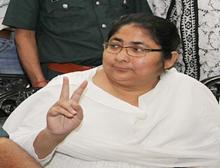 Passengers on board Air India flight from Delhi to Kolkata said the flight was delayed because Trinamool Congress MP Dola Sen did not cooperate with the staff.

Devendra Singh, a co-passenger, told ANI he did not know whether she misbehaved with the staff as he was seated in the end row, but added, "The lady came on board with her mother. The crew asked to change to a safer seat as she could not be seated in the emergency exit row, but she refused to shift and held up the flight for an hour.''

Another passenger claimed that the TMC lawmaker misbehaved with the cabin crew.

''The cabin crew asked her to change her seat as the 11th row has an emergency seat, and in an emergency, her elderly mother who was seated on the emergency seat would not be able to operate the system,'' he said.

"The lady screamed and identified herself as the Member of Parliament. She did throw her weight around. She could have cooperated with the airline which she did not," he added.

Congress MP Om Prakash Mishra, who was also a co-passenger, said that he was not aware whether Sen misbehaved with the cabin crew but added that she didn't cooperate and the flight was delayed.

Air India issued a clarification stating that Sen did not ask for a wheelchair for her mother while booking seats for the Kolkata bound flight, but her mother boarded on a wheelchair.

The national carrier further said that the parliamentarian had booked two seats, adding a passenger with wheelchair cannot be seated near the emergency exit as per the Civil Aviation Requirement (CAR) rules.

"There was no remark of wheelchair during booking, but when all the passengers boarded the flight one passenger was in a wheelchair. Cabin crew requested that a wheelchair passenger can't travel in emergency exit as per CAR rule. However, MP Dola Sen started screaming," it said.

The Air India officials said that Sen was offered a business class ticket, but the parliamentarian refused.

"Passengers on board and the captain of flight intervened and finally the flight departed 39 minutes after the scheduled time," it said.