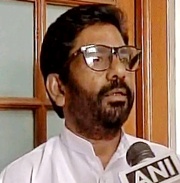 Shiv Sena MP Ravindra Gaikwad may soon find it impossible to fly in India. The Federation of Indian Airlines (FIA) - an umbrella organisation representing IndiGo, Jet Airways, SpiceJet and GoAir - is examining if the MP can be barred from flying in their planes. A decision to this effect may be taken shortly, The Times of India quoted an FIA member as saying.

However, another report in Hindustan Times says a senior official FIA official denied having barred Gaikwad, who had assaulted an Air India official on Thursday, from flying.

The FIA's association director, Ujjwal Dey told HT, ''We have not banned the MP. We do not have powers to ban anyone. In any case, Air India is not part of the FIA.''

Air India left FIA some years back as the organisation often opposes government policies, which the state-owned carrier's management could not do. AI is planning its own no-fly list on which Gaikwad is likely to find a place.
Senior Air India officials are meeting on Friday to decide how to blacklist Gaikwad, who assaulted an Air India official at Delhi Airport, and create a no-fly list for unruly passengers.
Gaikwad had hit a 60-year-old airline duty manager with his sandal on Thursday on a Pune-Delhi flight AI 852. He was angry because Air India gave him an economy class seat, in a flight that did not have a business class.

The MP refused to come out of the aircraft for almost an hour. He started hitting the staff when he was requested to de-board. Later, he actually boasted about the incident, saying he had hit the official ''25 times''.

Air India said Gaikwad had an open ticket for business class, which means he could have travelled in any Air India flight.

''The legal team will also suggest ways. We will prepare a list of such flyers in the past two years and put their details in the system. Once they try to book through Air India, their name will be showed in the blacklisted category,'' said an Air India official.

The airline will also come up with a Standard Operating Procedure (SOP) and guidelines and define various parameters of unruly behaviour.

''Harassing an air hostess or manhandling airline staff will fall under the category and we will define other parts of unruly behaviour of passengers. We will see how other airlines are doing it,'' the official added.

However, it is going to take a lot of effort since unlike private airlines, Air India comes under the ministry of civil aviation. The national carrier will need to approach the ministry and get a notification issued to ban a passenger and prepare a SOP.

Air India chief Ashwini Lohani has already asked his staff not to wait for an approval to file a police complaint in the case of misbehaviour or assault by a passenger.

''While we have filed two FIRs it is necessary that in all such cases of a passenger misbehaving ie assaulting an Air India staff, the airport manager would invariably lodge an FIR with the local police without waiting for any approvals,'' Lohani said in a statement released to the staff.

This will be the first time Air India may ban any passenger from flying on its flights.

There have been several incidents of unruly behaviour by the fliers on board various airlines in the recent times. Officials say 53 such incidents have been reported by the domestic airlines between July 2016 and February 2017.

SpiceJet chairman Ajay Singh said, "SpiceJet supports a no-fly list to bar unruly flyers who are a safety hazard for not just the crew but even the travelling public. The government needs to act on this soon. An attack on our employees and crew is an attack on us and we strongly condemn such incidents."

IndiGo also said it supported a no-fly list for unruly passengers. The FIA is examining if it is possible to have a no-fly list of airlines or if this has to be issued by the government to ensure people deemed as unsafe passengers do not fly any airline.

Indian carriers have so far never barred any individual from flying and Gaikwad's may be the first case of its kind.

"Airlines staffers - cutting across all carriers - are very upset with what Gaikwad did on an Air India plane. He may get violent again. We also fear that other passengers and / or airline / airport staff may return the favour to the MP. In the interest of safety, he may have to be barred from flying," said an airline official.

Air India reacted on Thursday night itself. Lohani had said in a Facebook post, "One MP assaulted an Air Indian at Delhi just because the aircraft did not have executive class. The airline in response filed 2 FIRs in the local police station, one for assault and the second for forcibly occupying and detaining the aircraft for 40 min. Last year there was a similar incident at Tirupati and it too was taken up in all seriousness. We would not permit anyone to misbehave with Air Indians on duty and would go all the way to ensure that justice is done."

Aviation minister A G Raju had tweeted, "We are also working on creating institutional mechanisms to check undesirable flight behaviour or unruly passengers. Such regrettable incidents should never happen again."

According to the International Air Transport Association (IATA), ''unruly passengers'' are one of the top three safety issues that concern cabin crew.

It said in 2015, there were 10,854 reported cases of unruly behaviour by the passengers across airlines worldwide, which translates into one incident for every 1,205 flights.