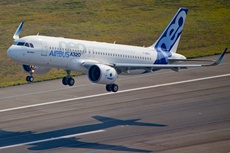 The list price for each of these planes is $102 million, putting the total list price of the IndiGo order at $25.5 billion.

The low-cost carrier had earlier placed orders for 280 A-320s, and the new memorandum of understanding is over and above the previous order.

Airbus has thus bagged its biggest single order for commercial jetliners, as IndiGo bets on a boom in Indian aviation. In a statement from Paris, the manufacturer called it the "single largest order by number of aircraft".

''There is a big Indian middle class that's growing while India's jet fuel prices are among the highest in the world,'' Airbus's sales chief John Leahy said.

The A320neo, which made its maiden flight in late September, is the latest version of the Airbus's popular single-aisle A320 jets that includes a new engine and other devices to cut fuel consumption.

The Indian airline's order would be the biggest Airbus has received since Indonesia' s Lion Group last year placed an order for 234 Airbus A320 planes, valued at a combined $22.4 billion at list price.

Airbus has sold more than 3,250 of the planes, beating the more than 2,000 orders Boeing Co has booked for its 737 Max, a similar upgrade the Chicago-based plane maker is undertaking for its best-selling single-aisle 737 jet.

The privately-held IndiGo is aggressively expanding to defend its position as rival low-cost Asian carriers that are seeking to tap the rapidly growing Indian market.

IndiGo now has a fleet of 83 A320-200 single-aisle Airbus planes. The carrier had previously placed orders for 280 Airbus aircraft, a mix of different versions of the A320.

IndiGo is controlled by India's INterGlobe Enterprise Ltd, and currently flies to 31 cities in India and five overseas, including Bangkok and Dubai.

IndiGo president Aditya Ghosh said, "This new order reaffirms IndiGo's commitment to the long-term development of affordable air transportation in India and overseas. The additional aircraft will enable us to continue to bring our low fares and courteous, hassle free service to more customers and markets and will create more job opportunities and growth. The IndiGo team is energised and excited to herald this new phase of our growth."