National carrier Air India cancelled 76 flights today, the second day of a strike by a section of its employees. The strike comes after a 'gag' order following the crash of the Air India Express Boeing 737 from Dubai in Mangalore three days ago, killing 158 people. 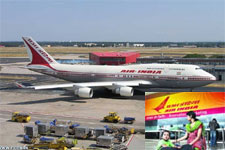 Some 20,000 employees have struck work against a management order not to talk to journalists after the crash. They are also protesting a delayed payment of wages and shortage of cabin crew, union leaders say.

Thousands of passengers have been stranded after the airline cancelled 76 domestic and international flights today. These include flights from Mumbai, Delhi, Calcutta, Bangalore and international destinations like Kathmandu, Singapore, Bangkok and Dubai.

"The people have walked out in a flash," Air India spokesman K Swaminathan said after the strike began on Tuesday evening. The airline said that the strike was restricted to a section of ground workers.

The leader of one of the striking unions, J B Kadian, said that they had "begun a flash strike to protest the delay in payment of salaries and highlight the problems of the cabin crew".

The government is reportedly keeping a close eye on the strike and NDTV quotes unnamed sources as saying that the airline has been told to act tough against the 20,000 employees on strike.
\
Finance minister Pranab Mukherjee has called up civil aviation minister Praful Patel and told him that it's time for some tough action, including dismissal of union leaders who have called the strike, NDTV reports. The airline is notoriously overstaffed, one of the reasons why it is deeply in the red.