The fatal crash of an A400M air lifter in Spain on 9 May was caused by  incorrectly installed engine control software, a senior Airbus Group official said. 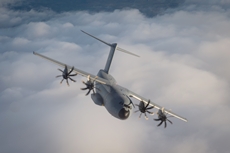 He added that data from the flight data recorder which was shown to Airbus engineers confirmed the internal hypothesis that the aircraft had no problem.

''The black boxes attest to that there are no structural defects [with the aircraft], but we have a serious quality problem in the final assembly,'' Lahoud told the newspaper.

''We would like to see the data and compare it with our hypothesis and proceed quickly to understand the causes of accident, so our aircraft can get back into the air,'' he told shareholders at the company's annual general meeting in Amsterdam on 27 May.

Four Airbus Defence and Space flight-test personnel were killed when MSN23, an A400M destined for the Turkish air force, crashed during its first flight from Seville's San Pablo Airport.

The company's defence and space division however cautioned that it was still too early to draw any conclusions from the accident and full results of the investigation were needed in order have the full picture.

"Like all accidents, it will certainly be a combination of issues and not one single cause."

However, an independent, internal test by the company earlier this month showed similar technical shortcomings. The test warned of a bug in the Electronic Control Units (ECU), which controlled how the A400M's engines operate.

An expert told AFP on the condition of anonymity, that such glitches could indeed lead to a loss of control of engine power leading to a crash.

The disaster led the UK, Germany, Malaysia, Spain and to ground their planes, till the Spanish-led investigation concluded. According to the group, however, other A400M aircrafts currently in service had all been subject to check and were "100 per cent protected from this failure."