New Delhi: Minister of state for defence MM Pallam Raju, has informed the Parliament that Hindustan Aeronautic Ltd (HAL) has received an order from aircraft manufacturer Airbus Industries for the supply of 2,000 doors for its single-aisle family of aircraft. 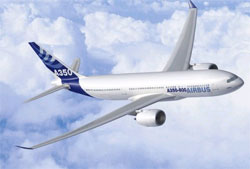 The follow-on contract has been concluded with Airbus for supply of forward PAX doors for A-318/319/320/321 variants for the entire Life of the Project (LOP).

The follow-on contract will be executed after the completion of its existing contract for a cumulative order of 1,406 shipsets.

HAL has been supplying the doors to Airbus against the existing contract for cumulative order of 1,406 shipsets which is likely to be completed by January 2010.

In May last year, Hindustan Aeronautic Ltd (HAL) had announced it had concluded an agreement with Airbus Industries for supply of 2,000 shipsets of forward passenger doors worth $150 million.

As for the current agreement, the minister's statement said, profits will be assessed after the commencement of supplies against the follow-on contract based on the prevailing cost in terms of labour, material etc.

The minister also clarified that there was no proposal/discussion for manufacture of civil aircraft in the country in collaboration with Airbus Industries or other firms.