Air India to seek compensation for late delivery of 787 Dreamliners

New Delhi: Air India may ask Boeing to compensate it for late delivery of the 787 Dreamliner, of which aircraft Air India is one of the biggest customers. Boeing says it is expecting to deliver the first 787 to Air India five months late. 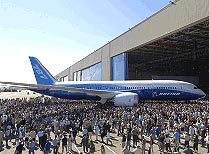 Originally, Boeing had planned to deliver its first 787 Dreamliner to launch customer All Nippon Airways in May 2008, which it has now delayed by six months. The Chicago-based company said that the delay was because of problems in the new global network of plants that are building major sections of the new plane.

Air India is third in line to receive the 787, and was due to receive its first plane in September 2008. The delivery will now take place in February 2009.

Air India ordered 27 Boeing 787 Dreamliners as part of a 68 aircraft order to Boeing in December 2005.