An official inquiry into the Mangalore plane crash in May that killed 158 people has concluded that pilot error was to blame. 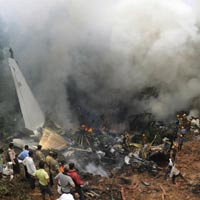 Details leaked to the media showed that the senior pilot of the Air India Express flight, Zlatko Glusica, was in 'sleep inertia' – he had been asleep for much of the flight and then made critical errors because he was disoriented when the plane began its descent - approaching the runway at Mangalore at the wrong angle, and ignoring warnings from his co-pilot to abort the landing and try again.

The plane, a two-year-old Boeing 737, overshot and burst into flames after crashing into a ravine. The Mangalore runway is located on a clifftop and leaves little margin for error, especially in conditions of rain and low visibility that prevailed on the morning of 22 May, when the plane crashed.

Zlatko Glusica was captured loudly snoring on a cockpit recorder, the accident investigation found. After waking, Glusica did not respond when his co-pilot H S Ahluwalia repeatedly urged him to abort the landing.

As soon as the plane touched down, Ahluwalia is believed to have asked his Commander to pull all stops to take-off again immediately. But the response was slow and the Boeing 737-800 aircraft departed from the paved surface of the runway and hit a localiser (radar) structure in the runway end safety area.

The plane, which arrived from Dubai, then broke through the boundary fence on the side and plunged into a gorge, when it caught fire. Both Glusica and Ahluwalia were killed.

The approach of the aircraft while landing was also wrong in terms of height and angle, which led it to miss the 'landing threshold' area of the runway by almost 2,000 feet or 600 metres. Data retrieved from the cockpit voice recorder showed that the captain was on the wrong glide path and delayed in taking corrective measures despite his co-pilot's "go-around" request.

In the 2.05 minutes of CVR recording, the last few seconds clearly says, "We don't have runway left", after which the CVR has recorded the loud crashing sound.

Debate over 'tired pilots'
John Cox, a retired airline pilot who works as a safety consultant, cautioned that other factors could be blamed for the Mangalore crash. For example, the co-pilot could have woken the captain earlier and been more assertive, he said.