Airbus, one of the world's leading commercial aircraft manufacturers has increased its global outlook on the requirement of airliners for the next 20 years to 25,000, 3-per cent up from its February 2008 estimate of 24,260, propped up by increased demand in Asia, a report published yesterday said. 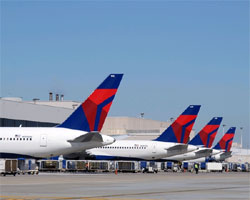 The European aircraft builder believes that increasing number of low-cost carriers and demand for more fuel-efficient jets and will augment growth.

The company's forecast includes 900 freighters and total requirement is valued at around $3.1 trillion, compared to the earlier estimate of $2.8 trillion.

Airbus' view is in contrast to the US air craft giant Boeing's June estimate, which trimmed its previous forecast by 1-per cent to 29,000 over the next 20 years.

Airbus believes that long-term air traffic will remain strong to the cyclical effects of the aviation sector, and expect that the 2-per cent slump in traffic volumes in 2009 will be compensated by a 4.6 per cent jump next year.

The aircraft manufacturer is optimistic that air traffic will double in the next 15 years which would demand 24,100 new aircraft including the replacement of the ageing ones.