Researchers at King's College London have discovered that leukaemic stem cells can be reversed to a pre-leukaemic stage by suppressing a protein called beta-catenin found in the blood. 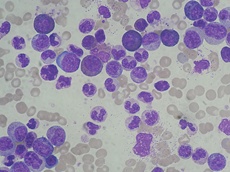 They also found that advanced leukaemic stem cells that had become resistant to treatment could be 're-sensitised' to treatment by suppressing the same protein.

Professor Eric So, who led the study at the Department of Haematology at King's College London, says the findings, published today in the journal `Cancer Cell', represent a "critical step forward" in the search for more effective treatments for aggressive forms of leukaemia.

The role that beta-catenin plays in the development and drug-resistance of stem cells in acute leukaemia was previously unknown. This study, funded by the Association for International Cancer Research (AICR), Cancer Research UK and the Kay Kendall Leukaemia Fund, reveals its significance and highlights it as a potential therapeutic target that could allow selective eradication of leukaemic stem cells.

King's scientists looked at leukaemic stem cells found in types of leukaemia that involve mutations of the MLL gene. This accounts for around 70 per cent of infant leukaemias and 10 per cent of adult acute leukaemias. The prognosis for this type of leukaemia in children is not good - only 50 per cent survive past two years after receiving standard anti-leukaemia treatment.

To understand how the disease develops, the King's team carried out a series of experiments to look at how pre-leukaemic stem cells (which do not always develop into leukaemia) are different to leukaemic stem cells, which sustain the disease and are likely to be responsible for relapse. They carried out studies in mice, in cultured human cells derived from cord blood, and on human leukaemic cells obtained from two leukaemia patients.