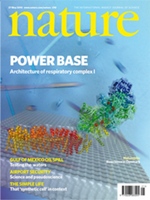 A central process in any living organism is that food reacts with oxygen from the air and, in the process, energy is released that is used for the production of a substance known as ATP. ATP can store this energy and distribute it throughout the whole organism.

Until recently, an important detail was missing for a full understanding of this process - it was known that, during the process, protons are transported across a membrane within the cell, but, for a major part of the process, it was not known how. The explanation has now been provided by three researchers from the UK.

Performing experiments at the Swiss Light Source (SLS) and the European Synchrotron Radiation Facility (ESRF) in Grenoble, they determined the structure of the responsible molecule and used this result to explain the relevant mechanism. They have shown that part of the molecule acts as a tiny piston, pushing protons through the membrane.

The SLS is one of the leading centres for this kind of investigation and is praised for the high quality of its X-ray beams and its state-of-the-art detectors. Three SLS beamlines are dedicated to the determination of the structures of large bio molecules, and each year attract many leading scientists from all over the world. The work of the British scientists has been published in the journal Nature, which in itself constitutes an important success in any scientist's career. In addition to this, an image of the molecule investigated was printed on the cover of that issue - a fact considered by most scientists to be a particular distinction.

Mitochondria are sometimes called cellular power plants, because, in these cell components, substances stemming from food react with oxygen from the air. In this reaction, energy is released that is used in the mitochondria to form the substance Adenosine triphosphate (ATP), which can store energy and distribute it throughout the whole organism. When studied in detail, this is a highly complicated process, with numerous bio molecules involved. Firstly, electrons are released by the reaction with oxygen and initiate the combination of molecules sitting in the inner membrane of the mitochondrion.