Exploring the wilderness on wheels

Dhruv Bogra has over 25 years of rich and multi-dimensional experience with leading Indian and global brands where he has held senior leadership positions. Travel and exploring have been an intrinsic part of his life. He adopted his childhood passion for cycling in 2011 and since then he has travelled over 45,000 km on his collection of bicycles. His wanderlust and a love for the most scenic and toughest roads have taken him by cycle to the Himalayan ranges in Himachal, Uttarkhand, Sikkim and the Western Ghats. He is an aspiring writer and photographer. Bogra left corporate life to embark  on the epic cycling tour in late June 2016 from Deadhorse, Alaska to Ushuaia in Argentina.

In this interview with Swetha Amit, Bogra talks about his biking escapade, balancing his corporate life and passion and nature being a healer. 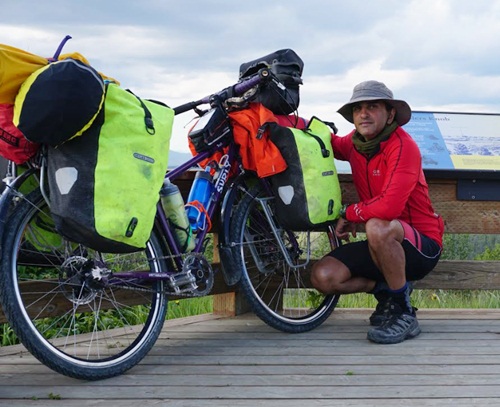 15,000 km, 10 countries and 400 days. What made you leave the comfort zone of your career at its peak and embark on this unusual voyage?
I have always been an outdoors person, largely due to my army background and upbringing. I was keen on exploring the world but corporate life tends to take a lot out of you. By the time I reached my '40s, I was fatigued and burnt out.
Since I was a child, I have always wanted to visit South America. In fact, my earliest influence was the comic strip character Tintin and my interest to visit the land of the Incas came from Tintin's adventures.  Things started to fall in place with age. When my daughter graduated in 2015, I decided to pursue my passion and embark on this cycling expedition.
There were a few reasons for this journey. One was to explore the world on a bicycle. The second reason was much deeper. It was more about the quest of finding my purpose in life. I tried searching for meaning in many books. I thought maybe going on the road and mingling with different cultures would help me discover that. I chalked out the route which of course would get diverted as and when I met more cyclists on the way. After a point, it became more about enjoying my journey.
Tell us more about your preparation for this escapade.
One has to be both physically and mentally fit to embark on this kind of a journey. Since my body was attuned to being in the Himalayas, the base level of fitness was already there. However, nothing in the world can train you for being alone on the road for days. What you can do is to try and figure out the gaps and see if you can cover it up.
So, first I studied the weather conditions, terrain and figured out the gear I had to carry. The gear has to perform multiple roles as I would be cruising through various weather conditions. I also had to determine the amount of weight that I could carry. I found that I could carry up to 60 kg, which included that weight of the bike. I also read several blogs and articles where nuances of such expeditions are mentioned.  I researched on tents, sleeping gear and stoves based on their affordability and utility value. I also had to do extensive research on several places on the internet to understand different countries and the locations of supermarkets. That was the primary level of preparation.
The second level was getting the bike together. Happy Earth Enterprises is the distributor for one of the best touring bikes. It took about four months to build the bike that I wanted. When I finally got it, I took it up to the mountains to train on it. Initially I began training on it with 20kgs and then graduated to heavier weights. I would take my bike to the mountains of Choktar area and train. I acclimatized myself by building tents and cooking on my terrace during winters. All this really helped me prepare for this expedition.
How long have you been into cycling? What got you hooked to the sport?
Actually, my earliest memory of cycling was in class 3 when I would cycle from home to school in Mathura. We were in the army cantonment and there wasn’t much traffic on the roads during the 1970s. I continued cycling till class 11 and 12. Once I started work, this hobby got sidelined. However, I picked it up again in 2011 when I was in Mumbai.
There is an interesting story behind this. At that time, Royal Enfield was relaunched and a store had opened in Bandra. I found that the waiting period was 7-8 months. I went and checked out a bike store, which was next door. I ended up getting a Trek bike, an American brand. That’s how I revived my hobby. I did my first tour to Kangra valley with a group. After that I rode to Himachal, Dharamshala and to Khardungla.
How did you manage to balance your time between the demanding corporate life and your passion for long-distance cycling?
I barely slept for 4-5 hours. There were times when I would get home late night on Fridays after a long-haul flight. I had to be up by 5:30 am to go cycling on Saturday mornings. However, I’d try and catch some sleep during the afternoons on weekends. It was very tough and my body would crumble under fatigue. I was in a senior leadership role when I took up cycling. During my business trips, I used to hook up with a cycling club and exploring places on a bike. I did that in countries like Australia, Germany and South Korea. Despite the hectic schedules, I found that some of the best ideas emerged from my morning cycling.
An unconventional escapade like this is always met with some apprehension and resistance. How did you manage to convince your folks?
I think it was my conviction about my abilities that ultimately gave them confidence. My father having been in the army has seen so much in life. Despite that, he was the most scared of the entire lot. Probably at that age, you tend to feel vulnerable about the fact that you may not see your son again. However, I was confident that I would complete this expedition successfully.  I must say that they have endured a lot and were quite brave. During my trip, there were days when I would go out of the radar as there was no network in some of those highways. It was tough on them especially when they couldn’t reach me on such days. When I came back and later handed a copy of my book to my father, he told me that sending me off on such an expedition felt like sending his son to war. 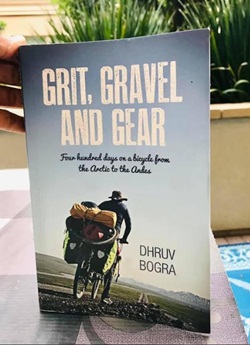 A lot of books deal with the theme of nature playing a significant role in healing the mind and soul. What is it about nature that helped you gain insight and find your true calling?
One thing that I discovered during this expedition was that man was meant to be with nature. During my journey, I found myself connecting more and more with nature. There were times when I would sleep under some ancient tree and end up having some weirdest dreams. Some of them were scary and it felt like the spirits of those trees were conversing with me. I also encountered a lot of animals including bears and wolves. There was this point when I came face to face with a bear, which was just 10 feet away. When a bear looks at you closely, you see its eyes are so soft and gentle. I lost my fear instantly. and when you are no longer scared, the animal senses it too and quietly walks away.
After your tryst with wilderness and living sans comfort, has your perspective towards material pleasures changed?
Yes, absolutely. I don’t feel attached to anything like I used to earlier. I am still a little possessive about my books. Otherwise my entire perspective on what is important in life has undergone a big change. This change comes out in small things during my day whether it’s how I travel to work or how I conduct myself with people. I have also realized how so many things are unimportant now. It’s not that I have entirely stopped consuming. I still do albeit in limitations. For instance, I’d buy something related to my passions — cycling or photography. I don’t buy for the sake of buying because I find something beautiful. My love for nature and animals has grown significantly to an extent that I want to do something for them. I was also very negative as a person earlier. Now this tryst with nature has healed me and helped me became more positive as a person.
How did your deal with loneliness during this journey?
I never actually felt lonely. Maybe, I missed people at times but never faced bouts of lows. I was seeing new things every day and my attention was focused on just surviving in the wilderness. I had to look for a place to camp every night, pitch my tent and cook my food. After an entire day of cycling, I’d be tired so I would go off to sleep by 10:30 pm. The next morning again, I would set off. My entire concentration was on the road during the day. So, I literally had no time to think. However, I did feel detached from the world when I encountered a surreal feeling especially in the Arctic and the Andes. These philosophical questions kept churning in my head making me wonder if such a world actually existed. Having said this, I would have definitely felt happier having a companion during this journey.
Lastly, any more expeditions in the offing?
I plan to do a few micro ones. Not for as long as one year. Maybe something like a duration of three weeks in either Iceland, Norway or Mongolia. I seem to be drawn to remote places. Facing those hardships and struggles tends to make me more resilient. Every couple of months, I go to the Himalayas for three-four days just to keep myself going.
(Also see: Book Excerpt)
MORE REPORTS