Bahubali: the backstory of a blockbuster in 100 days

Anand Neelkantan is the author of the bestselling Asura:Tale of the Vanquished, which tells the story of the Ramayana from Ravana's perspective. He followed this up with the hugely successful Ajaya series. Ajaya Book 1: Roll Of The Dice and Ajay Book 2: Rise of Kali narrated the Mahabharata from Duryodhana's point of view. Both Asura:Tale of the Vanquished and Ajaya Book 1: Roll Of The Dice were nominated for the Crossword Popular Choice Awards in 2013 and 2014 respectively. 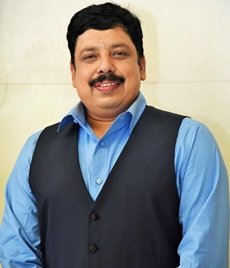 Neelkantan has also written screenplays for various popular TV shows including Star TV's mega series Siya ke Ram, Sony TV's Mahabali Hanuman and Colours TV's Chakravatin Samrat Ashoka. He has also written for major newspapers such as The Hindu, The Times of India and The Indian Express. Besides English, he also writes in Malayalam and has published stories as well as cartoons in various Malayali magazines.

In this interview with Swetha Amit, he talks about the idea behind the Bahubali Series, traces back his journey as an author and discusses aspects of loyalty, honesty and change.

The rise of Sivagami is a compelling historical fiction saga that depicts a flurry of emotions and multiple interesting characters. How and when did you conceive of this idea?
SS Rajamouli the director of Bahubali had read my previous books- Asura and Ajaya, and liked both of them especially Asura. He immediately called me for a meeting and said that he wanted to go behind the backstories of what they had shown in his film. They had a rough sketch and didn't have any of these characters, which are there in my book with the exception of Sivagami, Bijjala and Kattapa.

He wanted me to create my own story and see how it turned out. It was a big responsibility and I had just 100 days to complete it. Fortunately, it came out well and the book is doing well. Going back to the process of penning down the book, which is almost close to 500 pages, it was challenging, considering the fact I had to balance my time between my corporate life, TV and family. I am glad it has turned out well.

The movie Bahubali was a blockbuster and the second part is due for release. Do you feel that the movie helped your book by generating additional interest amongst readers than it would have if the movie hadn't been released earlier?
Well I see both advantages and disadvantages. The advantage lies in the sense that the title of the book will instantly attract people towards it especially since the movie was a blockbuster. However, there also exists a disadvantage as many people will be under the impression that it's just the story of the movie and since they have already seen the movie, they might not be compelled to purchase the book. Every shop owner has to explain that the book is a prequel to the movie. I also feel that books have a bigger life than movies.

Your previous books were sort of antithetical to the two epics - Ramayana and Mahabharata - where the characters were already established and well known. How did you go about chalking the various characters in The Rise of Sivagami , Bahubali part 1, where the characters were not as significantly known as those in the epics?
In a way it was more challenging to write Asura and Ajaya as I was challenging a 5000-year old conviction and beliefs of people. The characters of the protagonists in my earlier books are different from what people have been told by their parents and grandparents. It was tough to shake those beliefs as I was giving an entirely different perspective to them. I had to sound convincing enough for readers to not even feel an iota of doubt that maybe what I was saying could be true.

With Bahubali part-1, I took some inspiration from the current day politics. Being a history buff, I could find all prototypes in historical personalities to shape up my characters. Though Bahubali wasn't as predominant as Ramayana and Mahabharata, it made things easier in a way as it gave me more freedom and flexibility to shape my characters the way I wanted to. While Bahubali took 100 days, Asura took six years to write. Both books, as I have mentioned, are about close to 500 pages.

There is an interesting line in your book which states that "in order to come up in life, one needs to be devious and cunning". Do you feel that honesty as a virtue does not hold forte anymore in ascending the ladder of success?
Well, this line only pertains to the nature of that particular character. If you look at another character in my book, that of Skandadasa, he believes in absolute honesty. To each his own. You see everybody is manipulative in their own manner and choose to use a tool that is suitable for them to get through. If you ask me, even honesty is a kind of manipulation. Like for instance Arvind Kejriwal [the chief minister of Delhi] used honesty as a tool to come to power, as did Gandhi. Yudhishtir again used honesty as a weapon to portray his strength while Shakuni relied on lies as his tool. It's all about what works for people and ultimately boils down to a psychological game.

''You can change a system only by being a part of the system'', is another thought-provoking line your characters Skandadasa. Does the same logic apply to the current political scenario in our country as well?
Not necessarily. Many people's revolutions have taken place when they have not been able to get inside the system and change it. This is again the character of Skandadasa. He is unable to change the system despite being in it. For instance, when he tried to put an end to the brothel system, it created trouble. It's similar to how crime rates increased once dance bars were banned. So, it's difficult to pinpoint and say what is good and what is bad. It's an endless debate. Personally speaking, I have never been in favour of extremities. I have always chosen the middle ground and from this angle you get to see all sides of the situation.

"A few people may be bad, but doesn't make a country bad", is another line by the fiercely loyal Kattapa. Unfortunately due to a few black sheep, people are prejudiced against an entire community or a nation.
In fact, the response to this statement is by another character in the book who says that a few people may be good but that doesn't make one's country necessarily good. As for prejudices, you see it's been passed on from generations. Such wired notions occur due to the fear of the unknown. We tend to make statements about generalising an entire community because we don't know much about them. Once we step out and actually get to know them, we may not develop such perceptions. For instance in an office setting, there are all communities. However, we do not find them problematic as we get to know them over time. Same logic applies outside. When you step out of your misconceptions and mingle around in your neighbourhood, you will find some of them to be good.

The fierce loyalty of Kattapa catches the eye of the readers as he is bound to his duty, or Dharma, irrespective of the treatment meted out to him. Does such a degree of loyalty exist today?
Let me give you a perspective on this. We all consider Hanuman to be loyal to Ram, right? Now instead of Hanuman let's put X in his place who is loyal to Y. Now X goes as a messenger and due to his loyalty he ends up burning down the place. So, is loyalty considered a good or a bad thing here? If you look at it from Y's perspective, he was wronged and therefore it was deserving of the place to be in flames. However, when you look at it from the innocent citizens' perspective, then they have been wronged as the problem lies between two individuals. Why should they be harmed? Hence, from their perspective this sort of loyalty was wrong. This is debatable.

Loyalty does exist today. However anything extreme is also not good. For instance extreme loyalty makes you lose your individuality and independent thinking. An example of this would be a bomber-he is an extreme loyalist who is so loyal to his mission that he will go ahead with it no matter what. This is not good. However if there is no loyalty at all, it is another extreme. We will not have soldiers guarding our frontiers if there was no thing as loyalty. There has to be a balance between blind loyalty and blind rebelliousness.

Coming back to the book, The Rise of Sivagami is part 1 of the Bahubali series. How many books will we see in this series?
There are totally three books in the series. One is out. There are two more remaining. This will be a TV series - something similar to Game of Thrones but more on history and mythological lines.

Tracing back your journey as an author, what inspired you to start writing and choose mythology as your forte?
Story-telling was always my passion since childhood. In fact in school I would get more prizes for cartoons. Mythology is something I have grown up with so I write what I know best. When I was trying to publish, I used to get letters saying that I should write something for the youth as that's what sells. However, such topics did not interest me so I saw no point in writing on such topics. I faced 18 rejections until I finally found my publisher. I guess that's the journey every author goes through. Writing isn't easy at all. People think it is, but it's quite a struggle.

What are your favourite books?
I read anything and everything. I have a lot of favourite books. However one story that continues to fascinate me all the time is the Mahabharata.

Lastly, when can be expect Part 2 of the Bahubali series?
You can expect it by end of this year. Say, October-November or latest by December.

(See book excerpt: Excerpt from The Rise of Sivagami )