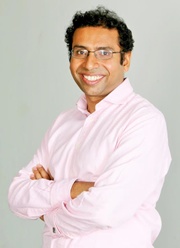 Saurabh Mukherjea, CEO of institutional Equities, Ambit Capital, Mukerjea has spent most of the past decade trying to construct and implement systematic methods for analysing Indian companies in the midst of the chaos that surrounds the Indian stock market. A London School of Economics alumnus, Mukherjea is also a Chartered Financial Analyst. In this interview with Swetha Amit, he talks about his book,  The unusual billionaires.

The unusual billionaires is a story of seven companies, handpicked out of 5,000 listed in the stock exchange. How did you chose these particular  companies?
As explained in the opening chapter of the book, The unusual billionaires focuses on a select few companies who have in the preceding decade delivered at least 10 per cent revenue growth and at least 15 per cent return on capital employed. Whilst India has over 5,000 listed companies, very few companies (only a dozen or so) are able to pass these twin filters consistently. The book therefore delves deep into seven such companies to understand what makes these companies special and, more generally, why greatness is so hard to attain in corporate life.

In the story of Asian Paints, the company incorporated a sort of a family culture for its employees, which enhanced its equity. Yet the salaries are not really high. What motivated the employees to work to their utmost that helped Asian Paints retain the 'best' company tag always?
Well yes, Asian Paint manages to hire and retain the very best management talent in Indian without paying them top-of-the-line salaries. The firm achieves this outcome by looking after its people especially in times of personal distress, caring for them on an ongoing basis and giving them a huge amount of operational freedom, which motivates the employees to do their best.

Berger Paints used Bollywood to connect with its audience as a part of the change in its brand positioning by roping in a film star as a brand ambassador. While the initial sales figures go up, how much of a role do celebrity endorsements play in maintaining longevity in a business?
Several companies, not just Berger Paints, use stars to promote their brands. For example, as highlighted in the chapter on Astral Poly in the book, Astral used Salman Khan and the super hit movie Dabangg to radically improve the popularity of the Astral brand. More than the identity of the star, what seems to be central in the success of B2C companies is focused investment in advertising and promotions in order to keep the brand fresh and also keep the brand awareness high.

You have mentioned in your book how one small mistake made by companies can work to the competitor's advantage and push a particular brand back by three-four years. How much time does it usually take to compensate for that mistake and bring the brand back to its original state?
KS Dhingra, the promoter of Berger Paints, makes the point that you have highlighted – he says in chapter 3 of the book that Berger Paints stays focused on the job and waits for its competitors to make a mistake. In an intensely competitive industry like paints, such mistakes cost Berger's competitors dear and allow focused, innovative companies like Berger to forge ahead. I think the same point can be made in other intensely competitive industries. In business, as in life, making mistakes turns out to be a very costly proposition.

Moving on to the story of Marico, the war with HUL spurred many changes within the company for the better. Do you think fierce competition brings out the best in companies as it did for Marico, which not only reduced its dependence on Parachute and Saffola but also introduced new brands?
As the legendary economist Joseph Schumpeter said competition leads to ''creative destruction'' ie the weaker firms are destroyed and the stronger firms fight and become stronger, more competitive. The Marico versus HUL fight over the coconut hair oil market is a clear demonstration of this. Marico, the smaller firm, fought hard. It competed successfully and ultimately HUL sold its hair oil brand to Marico (rather than Marico selling itself to HUL).

In the story on Axis bank, you have emphasised that there is constant pressure for companies to grow. Sometimes the pressure on growth can lead to hasty decision that can prove detrimental to the company.  Yet lack of growth is also viewed in a negative light. So what is your take on this?
The statement regarding constant pressure to grow comes from Jamie Dimon [CEO of JP Morgan Chase] and it neatly encapsulates how executives the world over are perpetually under pressure – to grow or die. The great companies, the unusual billionaires are able to use this pressure constructively to grow at a measured pace. The more hasty companies grow in fits and spurts and ultimately fall behind the stronger, steadier growing competitors.

Lastly after The unusual Billionaires, what can readers expect from Saurabh Mukherjea next?
It took two years of weekends and evenings to pull this book together. I want to spend a year of living a more normal life before I start thinking about my next book.