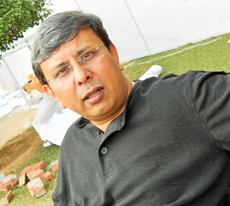 Thomas Abraham is the managing director-Hachette India, joined Oxford University Press as an editor in 1994, before moving to marketing. He moved to  Dorling Kindersley as marketing director in 2000 shortly before it was acquired by Penguin Books. Abraham shifted in the same position to Penguin, before taking over as its CEO & President of in India from David Davidar in 2003. during his tenure he trebled the turnover of the company before moving on to Hachette India in 2008. An avid quizzer, music and movie buff, Abraham talks to Swetha Amit about the response to The Mountain Shadow, whether sequels lives up to the expectation of the original, and about the forthcoming titles from Hachette India.

It's taken almost 10 years for The Mountain Shadow, the sequel to Shantaram. How was it received by readers response and what can fans of Shantaram expect from this book?
Fans of Shantaram who were awaiting this sequel eagerly have read it and not been disappointed at all. In fact some of the reviews of the readers online are as follows, "It's been nearly seven years and after reading the first edition, the characters remained fresh as if it had just been yesterday. GDR (Gregory David Roberts) is a great writer and the way he places the characters in the novel is splendid Also love the way he articulates the old Bombay and takes you back to the era in a remarkable manner.''

There is a general perception of sequels not living up to the original. Do you think The Mountain Shadow will break this myth? What is your view on this?
That remains to be seen. This perception comes from what befalls most novels that become cult and their sequels tend to be at a level below. Books like Shantaram were built by word-of-mouth. The Mountain Shadow is a return to that world. So, if you are a fan of that world, you will want to read what happened to the characters of Lin and Co.

Coming to the characters, The Mountain Shadow portrays some interesting and eccentric ones. How close do you think these characters are to real life individuals?
This would depend on the reader and his or her perspective. Both books belong to the fiction genre.  While everything in Shantaram was larger than life, a lot of it was also based on real life events. So if you accept that truth can be stranger than fiction at times, then you will find that 'some books are lived' as the tagline suggests.

Author Gregory David Roberts seems to bear a slight resemblance to the characters in his book - mystical and evasive. Could you as his publisher tell us a little more about the Shantaram'= whom the readers have read about so much? What is his expectation from the book?
The author has chosen to retire from public life. So this book has seen no events, no author based publicity or promotions. It's just the book out there, back for fans of Shantaram. There is quite a bit on the writing of the book on his website.

Shantaram was classified as literary fiction. Considering the fact that The Mountain Shadow deals with a mixture of themes like love, philosophy and crime, how would you categorise this sequel?
The book continues where the earlier one left off with the same characters, the same pithy sayings, the same complex world and the same gigantic sweep. I would classify it as Shantaram-2.

Being a book largely based on Mumbai, particularly South Mumbai, how do you see its appeal quotient to international readers?
In fact it is a huge hit overseas and is climbing the charts in the US and UK on release. Shantaram may be the definitive Bombay novel but that doesn't mean that its appeal is restricted to Mumbai solely. Just like any other book which is based on some other city, is not read only by the inhabitants of its locale, The Mountain Shadow follows the same principle.

What are your plans for Hachette India? Any major titles expected this year?
Plenty. There's a new Subroto Bagchi blockbuster called Sell, Godfathers of Crime by Sheela Raval, Sachin Tendulkar's paperback Playing It My Way, an amazing travelogue called Walking the Himalayas, and The Immortal by Krishna Udaysankar, amongst a host of others.