Introspecting on the purpose of life 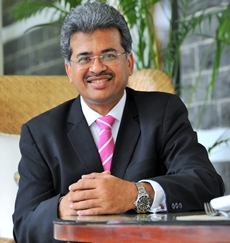 Rajan, formerly the global leader of people and organization at Ernst & Young, earned his PhD in leadership from IIT Delhi. An alumnus of XLRI Jamshedpur, and an economics graduate from Loyola College, Chennai, Dr Rajan has diverse interests including photography, travelling, and blogging and an active social media presence. He speaks eight languages, and is known to have a way with words. He also pens poetry and writes on business and leadership. In this interview with Swetha Amit, he talks about the concept of his debut book, Quote me if you can and the importance of finding that work-life balance and why he calls HR a thankless job.

'Quote me if you can' is an inspirational compilation of quotes. What inspired the concept of this book?
I didn't initially plan to publish a book. I was just posting my quotes on social media and I had written 12,000 of them. One fine day, Penguin Publishers, reached out to me, expressing their interest in publishing what I had been writing on social media. They found my quotes interesting and felt that these compilations could make a good book. So that's how the book Quote me if you can came about.

While several leaders, corporate professionals and authors write eloquent essays on various topics, what made you choose the interesting idea of quotes for your debut book?
I think the nature of the content chose itself. I have in fact written long-format articles prior to this for the business press. However, I just feel that the ability to comprehend what we learn and express it in short terms is quite challenging.  It's something I have learnt over a period of time. By indulging in a bit of word play, I realize that I am able to express something in just one or two lines, which will enable the reader to actually introspect. That makes it quite interesting. For this, I feel it's important to first get the principles right and once you know the alphabet, it's not difficult to keep it short.

You have said, "one needs to love what they do before they find what they love to do." How long does it take to find purpose in life?
Now, that's a very difficult question to answer as it varies from person to person. Some are able to find what they wish to do quite early in their lives. A fine example of that would be someone like Sachin Tendulkar, who was fortunate that his interests matched with his true passion which ended up being a career for him. However there are others who start off their lives with a compulsion to have a job, probably given their financial constraints or certain commitments which they need to fulfill. Its only over time, they get to realize their true calling in life and then follow their passion.

"HR function is usually a thankless one. Often needed, yet seldom acknowledged." Being the group head of HR, what prompted this quote from you?
I actually said that in a very positive light. I believe that it's a gift to be able to embrace the HR function.  One needs to possess that degree of selflessness in such a role and have the ability to derive joy from the positive development of other people.

Only then do you find fulfillment. The world of HR is an intangible one and quite tough to operate in as what a HR person does cannot get translated to monetary terms easily. Therefore you don't always get that 'Thank you' from stakeholders very easily.

It's difficult to see how people fare better in actual tangible terms. So while a HR person may do 10 things, only a couple of them get noticed and appreciated. It's the nature of our profession which HR professionals must accept as a thankless one. They should continue doing what they have to because it gives them immense joy, if not anything more.

"When was the last time you learnt a new skill? When was the last time you acquired a new interest? When was the last time you found a new friend?" While several working professionals are keen to learn something new, time constraints often come into play, leaving them frustrated and helpless. How does one deal with this issue and encourage employees to incorporate something new in their lives?
I strongly believe that you must find time for what you love else you are leading a monotonous and an incomplete life.  Charles Handy the management thinker used to say that we must lead portfolio lives and find a way to actually allot time to things that we need to allot time to.  For instance, if I keep on working, it can go on for 24 hours. So I need to know where to prioritise, draw the line and get on with other things.

If you love something, you must find time for it instead of making excuses. It's a clear case of a gap existing between intent and action, where a person intends to do something but fails to take action to fulfill  that intent.  If you do not know how to bridge this gap, then it's a choice you have made and probably that particular thing which you want to do is not that important to you.  If you genuinely love something, you will find ways to make time for it.

"What does a CEO become after becoming a CEO?" In such a scenario, where a person has hit his / her peak, how do they motivate themselves to keep going?
Everybody has that aspiration of wanting to become a CEO and so in a light-hearted vein, I had asked 'What next?' I do think it's important to distinguish between the journey and destination. The best CEOs I have met are the ones who think beyond the CEO chair. They use it as an enabler to create what they can by harnessing their own capabilities and those of their teams. For them, a CEO is just a position and not the end of a journey.

They tend to visualise as to what can be done in the next 20-30 years. They think of moving markets, creating a succession plan and leaving a legacy behind. For instance in the Tata group, the Chairman asked a vital question-' Now that we have 140 years legacy, what should we all be doing to build the next 140 years?'  Therefore when you have such thoughts and a vision, the CEO chair is not the destination, and you start defining the future quite differently. 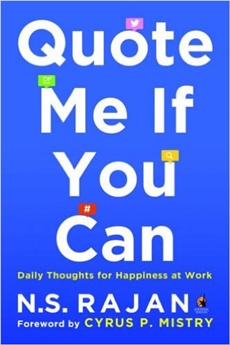 "Feedback is meant to spur action, not set off depression." Yet, one finds the latter taking place often. What do you attribute the reason for this particular phenomenon?
The feedback, an integral part of the appraisal system, is a very critical process.  As professionals, each of us come with our aspirations, fears, concerns and desires in mind and good leaders understand the need to deal with them. Feedback from our superiors can be a potential instrument to unlock value, develop the individual and build value for the future.

I have always believed that appraisal should be done in a constructive and humane manner instead of being conducted as a ritual. Conversations with your subordinate, focused on work content, with care, concern and the right degree of seriousness, can be highly productive. The superior must be able to discuss the future with the subordinate, enable him/her to understand his pluses and shortcomings without getting personal.

Most of the observations given during a feedback session must be evidence based to ensure that the subordinate does not feel belittled. Instead appraisal should be an eye opener for the subordinate to enable them to get a clearer picture of themselves and how they can better themselves as professionals and human beings. If this happens, then feedback will certainly spur action and not depression.

"Being named the best company to work for is not a good enough reason for people to stay there." As HR head, what do you think should prompt people to stick on?
One key element for an individual is the experience he / she goes through in a job. You can be in the greatest of companies, but you also have to keep in mind certain aspects which are essential for the person to stick on with the organization.

Individuals have to assess their compatibility with the organisation  they are working for. They need to consider whether their values as an individual are congruent to the organisational culture and values; whether they share the same vision with that of the organization. A good superior makes your work place that much more special apart from the workplace colleagues that you enjoy working with. These are some of the key factors for an employee to feel at home in an organization.

We, of course, must also bear in mind that in current times, it is employees who chose organizations, rather than organizations' hiring prospects.

Having penned a book of quotes, can you tell us the quotes that have inspired you personally?
Some of my own favourites of what I penned are:

What are your plans? What can we expect next from Dr. N.S.Rajan?
Well, this book was a bit of a surprise to me too. Let's see. Maybe I will write a book, which shares what I have been researching and putting to practice on happiness at work.