Behind the phenomenon called good luck

Ashwin Sanghi, is an entrepreneur, whose passion is writing historical fiction in the thriller genre. He has authored bestsellers like Chanakya's Chant, The Krishna Key and co-authored the crime thriller Private India, with American author James Patterson. His non-fiction title, 13 Steps to Bloody Good Luck has hit No 2 rank on AC Nielsen's Non-Fiction India List. Sanghi, who is currently working on, Sialkot Saga, a business thriller with a historical twist, talks to Swetha Amit, about luck, and the success factor of business leaders and entrepreneurs and how his tryst as an author was purely good luck. 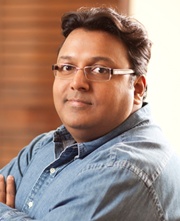 What would you attribute your success with non-fiction - to just good luck or was it something else?
As a writer of fiction of the conspiratorial and fast-paced variety I had never imagined myself as a non-fiction writer. But one day, I was asked to write a newspaper column on a current issue and I quite enjoyed the experience. I realised that having ideas that I wish to convey could not be expressed through fiction thrillers. At the same time, I am aware that I am incapable of producing daily or weekly columns. Writing a small non-fiction book seemed like a win-win solution. I hope to write more of them.

'Good luck' is an oft-used term by many in casual conversations.  What constitutes good luck? Is it something somebody is born with?
Of course there are people who get plain lucky. That's called ''dumb luck''. There's also ''constitutional luck'', which is determined by birth. But there is a third type of luck, ''circumstantial luck'' that you can work on. You can work on it by rising to the opportunities before you, recognising them better and responding to them effectively. In effect, being lucky is simply about being able to make the best of opportunities that life throws at you.

You have referred to many business leaders and entrepreneurs in your book. In your view what percentage of hard work, power of persistence and plain good luck contributed to their success?
It's difficult to assign numbers to a fuzzy concept like good luck. Most people see positivity, perseverance, risk-taking, etc, as means to success. That's not true.

Your book cites the importance of networking and opportunities playing a crucial role in luck such as in your case. How does one strengthen ones network? Going by this theory, would you say good luck favours extroverts more than introverts?
Networking doesn't mean parties and social events. Often, ''introverts'' have far stronger networks on the social media or within their domain vertical. For example, a hacker may not spend time chatting with strangers over cocktails but may have a very strong network of fellow computer geeks. But yes, another factor that does play a role is the ability to communicate effectively. Thus it is vital to overcome fear and shyness in order to let lady luck work her magic.

Many businessmen or bankers turn into full-fledged authors. Do you see that as purely a factor of good luck or does talent also play a vital role?
Think about this: you own a Bugatti Veyron, a car capable of doing 270 mph. You get in the driver's seat and zoom off only to realize that you are driving on Mumbai's roads plagued by potholes and traffic. The Bugatti is in your control but the road isn't. ''Dumb luck'' and ''constitutional luck'' are the road and ''circumstantial luck'' is the Bugatti. Within certain limits imposed upon you by the road, you can control the outcome of your journey. There are many terrifically talented people who are writers but they don't necessarily become bestsellers; on the other hand, there are average writers who sell in millions! 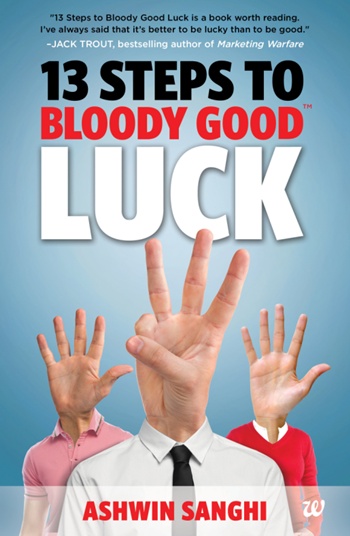 Sometimes good luck comes disguised as bad luck. How does one identify this 'good luck in disguise'?
We rarely do. We only realise that it was ''good luck in disguise'' after we have placed enough distance between ourselves and the event. The more important issue is whether we allow the setback (what we instinctively call ''bad luck'') to deter us. If we keep plodding on, we eventually realise that the so-called bad luck was simply put there to push us towards an alternative path.

How would you distinguish 13 Steps to Bloody Good Luck from other non-fiction books like The Secret or The Power of Positive thinking?
I have nothing earth-shattering to ''reveal'' to my reader. I have found that the best way of teaching anything is to avoid preaching. They say that a story is the shortest line between two people. This is a feel-good book written in very simple language that uses stories of others to convey to the reader that almost anyone can get lucky!

Lastly would you describe your success as a  writer to  luck by chance or perseverance?
Oh, my entire career is a stroke of luck! After completing my first novel The Rozabal Line, I found myself inundated with rejection letters. I described my situation to a close family friend. Taking a generous sip of his whiskey, the gregarious Punjabi gentleman responded, "In life, ninety-nine per cent is about good luck! Just remember that, son." In a slightly argumentative tone I asked, "But uncle, what about the balance one per cent? Surely that must be hard work or talent?" Laughing loudly, he declared triumphantly, "The final one per cent? That's called bloody good luck, my boy! Simply keep at it and wait for your bloody good luck to kick in!" That's precisely what I did!