Boxing the ghosts of the past

Writer-director Nidhie Sharma who has documentaries and travelogues for the American and European market to her credit, graduated with honors in English Literature from Delhi, and then went on to study film-making and screenwriting from New York University. From an army background, Sharma also has a passion for adventure sports, travel and books. Her first novel Dancing with Demons, set in the backdrop of boxing, is soon to be directed into a mainstream film by her. In this interview with Swetha Amit, she talks about her book, conquering one's inner demons and her future plans.

Your book is set in the backdrop of boxing, unique because it is primarily a rather violent male sport. What was the inspiration behind this?
I was brought up in an army background that exposes you to adventure and the outdoors very early on. I studied in various army schools across India and during that period I trained in karate, horse-riding and went to adventure camps. I grew up camping, trekking, hiking along with all the misadventures.

I watched live boxing matches too. They fascinated me no end. Two men beating the hell out of each other and the spectators cheering as the boxers bled. I noticed that every time a boxer bled in the ring, the audience cheered even louder. Human reaction to violence only shows how deep and primal that instinct is and that got me thinking. I started to watch matches on the internet. Soon I was following the sport like a fan does. I went to boxing matches while studying filmmaking in New York. I met boxers and coaches out of curiosity. I wanted to know what makes them take to this sport. Given my exposure and interests, I think the stage to write Dancing with Demons, was set a long ago. It was only natural that I set my story in the world of combat sports. 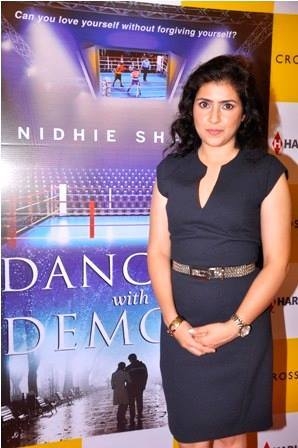 Could you tell us a little more about your background and what propelled you towards the literary world of writing?
I graduated with honours in English literature and was offered scholarship by the university but I think my journey into the world of storytelling began during my childhood with the stories of Panchatantra and later my mother introducing me to classic literature while I also watched her paint. My father being in the army introduced me to the joys of adventure sports.

On hindsight, I think these early influences shaped my storytelling ability, albiet in a visual way. I was also beginning to read Booker prize winners and I read voraciously through my teenage years. In a parallel, I was experimenting with poetry and short stories, and a lot of the early writing happened under the open sky in my garden, lying on the grass, dreaming about action and adventure. Later, I started to write book reviews for newspapers. I realize now that my writing an action drama set in the world of combat sports, which is considered visual and action packed by most critics, is no accident. Dancing with Demons is a sum total of all my early influences and experiences.

You are originally a filmmaker and scriptwriter. How different is it from authoring a book?
While these are principally two different mediums, both aim at telling an interesting story well. Also, both mediums need a strong beginning, a gripping middle and an every stronger end.

Having said which, as a novelist you are given wings and room to explore, to go into the minds of the characters, to go to places a film cannot afford to, visually or financially. Writing a book to that extent, is very liberating. However in film-making and screenwriting one is responsible for every second of screen time and the story needs to be exciting and fit well within the visual dictats. Technically, screenwriting needs to be more precise and driven by the three acts and might therefore be considered limiting. Having said that, I enjoy the limitations it presents also because I have a visual bent of mind and I like the screenwriting principal of 'less is more', which I have carried into writing this book, keeping the narrative tight and engaging.

In a nutshell, I think both mediums have their own challenges and audiences and it's to straddle them equally well if one has the talent and passion to tell a story.

Dancing with Demons, is a rather quirky title especially at a time when many are constantly battling their demons. To what extent do these ghosts from the past affect your self-image? And is there a way one can actual end up dancing with these demons in reality?
If you ever catch a boxing match, you will immediately notice that it's like a dance between the two fighters, there is a definite rhythm and pace. It's almost like ballet except that the 'dancers' are throwing punches at each other. And since the book is essentially about vanquishing inner demons, I decided to combine the two key elements and that's how the title was born.

More specifically, the demons are secrets that Karan and Sonia are tormented by… secrets that come in their way of fulfilling their destinies.

I strongly believe that these are our internal limitations, perhaps even emotional baggage….self-created or otherwise often come in the way of our becoming the people we are meant to be. That the demons lurking inside will control how our lives shape up. It is far easier to battle an external deterrent than to deal with the ones within. Overcoming one's limitations or demons is essential in order to fulfil one's true potential. That is the real core of this story. The good thing is, millions of people find a way to battle and overcome their inner demons. So there is hope for everyone and 'Dancing with Demons' is about that hope. It's about the light at the end of the tunnel.

Your character Karan Pratap Singh as an avid boxer, yet it's an irony that he couldn't fight his inner demons initially. Why do you think that even the strongest of individuals fail to conquer them?
If you were to read about the lives of many boxing champions worldwide, you will find that a lot of them come from broken, abusive, even impoverished, homes. You will learn that their childhoods were rough and that they carried their angst and anger into the boxing ring. Some were able to put the darkness behind, some couldn't.

Karan in my story is on the brink of winning a life-changing championship but throws it away because his demons surface and take control. There is no irony in that. Even the strongest person can be vulnerable and sometimes even the seemingly vulnerable person can deal with a difficult situation in a surprisingly strong way. All human beings are a bundle of contradictions. That's what makes us flesh and blood. The ability and strength to conquer inner demons lies within all of us. It's hard but not impossible. Even someone as conflicted as Karan finds the strength to do so.

Having said that, there are people who can't vanquish their limitations and find ways to make peace with them, fully aware of the ramifications of their decisions.

Similar to your character Sonia Kapoor, many people tend to run away to other cities in the hope that their past would disappear. What stops them from confronting them instead of opting to run away?
I think people prefer to run away because confronting the past requires a lot of inner strength which is hard to summon at that point of time. Escaping from the consequences of one's actions is like a natural reflex for survival and seemingly the easiest thing to do in the short run. In the long run, I think most people know that the past does catch up.

Coming back to the story, Sonia, much like Karan is a flawed character. She too, doesn't want to deal with her past but it surfaces and torments her in her nightmares. The past also literally catches up with her at a later stage in the story. The choice that she makes after that truly defines her growth as a character.

Both Karan and Sonia's growth and redemption arc is what this story is about. Hope being the constant hashtag.

A glimpse of the flashback led to deterioration in Karan's performance resulting in a loss and an unexpected ban. Going by this instance, how important is mental make-up in a sport in comparison to physical attributes like stamina and endurance?
Mental make-up is almost everything. India's biggest boxing story, Mary Kom is a shining example. She is not just a great sporting talent but also a fighter who has broken all traditional beliefs that age and motherhood are the end for a boxer's career. She has turned the rules on their very heads.

Physical attributes needed for a sport can be developed with discipline. It's famously been said that the war is won or lost in the mind first. Like life, that is true of sports as well.

Time is known to be the best healer, yet the scars of the past still remain. Do you think these scars are essential in shaping up a person's character and strength?
Everyone receives scars in the great battlefield of life. What differentiates one for another is how we deal with them. Do we hide them or wear them proudly? Do we allow them to shape our lives positively or otherwise? Do we carve our paths with the every knife that gave us the scars?  Do we allow suffering to make us cruel or kind? Do we become stronger or break down? Eventually, our scars define us, one way or another.

Did you anticipate Dancing with Demons being made into a movie while writing it? Do you think the movie will live up to the book?
As a storyteller trained in film-making, I know which of my stories lend well to cinematic interpretation and which don't. Dancing with Demons does because it has a right elements that a commercial film requires...action, drama, intrigue and romance.

As a filmmaker directing it, I understand the challenges of adapting a book but I am certainly hoping the movie lives up to it. I am also hoping to get my movie audience to pick up the book and find the little nuggets I will not take onto the screen.

What do you plan next?
There are so many stories to tell. This is just a beginning.

Just this morning, a young female reader tweeted to know if there was going to be a sequel to 'Dancing with Demons'. She wanted more of Karan and Sonia. My answer apparently made her day.

( See: Excerpt from Dancing with Demons )