In what is undoubtedly the most crucial appointment of his new term, Pakistan's Prime Minister Nawaz Sharif on Wednesday selected an outsider, Lt Gen Raheel Sharif, to succeed Gen Ashaf Kayani as chief of the country's powerful army. 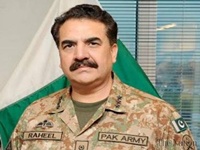 Gen Kayani will retire by next week – he shows no signs of pulling a coup to upset the current democratic government, as several of his predecessors have done – most recently Gen Pervez Musharraf, who upset the previous Nawaz Sharif government in 1999 and now languishes under house arrest.

Lt Gen Sharif, who is not related to the prime minister, was the third in line for the post by seniority, but has been given a step up the ladder. He comes from a noted military family; his brother was killed in the 1971 war with India and awarded a posthumous medal.

Gen Sharif's brother Shabbir was awarded the Nishan-e-Haider, Pakistan's highest military gallantry award; and also the Sitara-e-Jurat. Shabbir is the only soldier who has been decorated Pakistan's two biggest gallantry awards.

The appointment of Gen Sharif shows Prime Minister Sharif flexing his independence from a military command that until recent years had run roughshod over civilian governments.

Gen Sharif was hardly tipped as a candidate for command of the army, as Kayani retires after a tumultuous six-year stint. Gen Sharif has not held any clear first-tier commands, nor has he served in the influential Military Operations Directorate or come up through an intelligence (ISI) background.

According to the New York Times, Gen Kayani favoured Lt Gen Rashad Mahmood to succeed him as chairman of the Joint Chiefs of Staff - a nominally more powerful job that in reality is subordinate to the army chief.

But the prime minister thinks Gen Sharif ''is more pliable than Rashad and not as close to Kayani,'' the NYT report cited a senior American defence official as saying.

Like the prime minister, Lt Gen Sharif comes from Lahore, which is the heartland of military influence in Pakistan.

''Sharif is soldierly and professionally very sound. And because of his background, the prime minister seemed to have greater confidence in him,'' said a retired Pakistani general.

Many analysts see the choice as evidence that Sharif was looking for someone more pliable than previous army chiefs. But that kind of gamesmanship has come back to bite him before. During Mr. Sharif's previous stint in power in the late 1990s, he passed over more senior generals to choose Musharraf as army chief - the man who would later depose and replace him in the 1999 coup.

Until now, the 57-year-old General Sharif was in charge of the army's training programme, carrying out changes ordered by General Kayani to improve the army's counter-insurgency capabilities as it faces a growing threat from Islamist insurgents based in the tribal belt, particularly from the Pakistani Taliban.