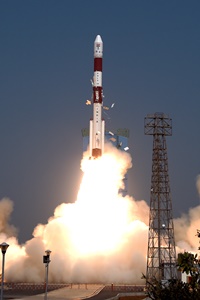 Isro’s workhorse Polar Satellite Launch Vehicle (PSLV C-51 lifted off from the first launch pad of Satish Dhawan Space Centre SHAR, Sriharikota,  as planned,  at 10:24 hours (IST). After a flight of about 17 minutes 23 seconds, the vehicle injected Amazonia-1 into its intended orbit and in the succeeding 1 hour 38 minutes, all the 18 co-passenger satellites successfully separated from the PSLV in a predetermined sequence.
Amazonia-1 is the optical earth observation satellite of Brazilian National Institute for Space Research (INPE). This satellite would further strengthen the existing structure by providing remote sensing data to users for monitoring deforestation in the Amazon region and analysis of diversified agriculture across the Brazilian territory.
The 18 co-passenger satellites onboard PSLV-C51 included four from IN-SPACe and fourteen from for New Space India Limited (NSIL), both companies under the Department of Space. Out of the four satellites from IN-SPACe, three were UNITYsats designed and built as a joint development by Jeppiaar Institute of Technology, Sriperumbudur (JITsat), G H Raisoni College of Engineering, Nagpur (GHRCEsat) and Sri Shakti Institute of Engineering and Technology, Coimbatore (Sri Shakthi Sat) and one Satish Dhawan Sat (SDSAT) from Space Kidz India. The fourteen satellites from NSIL carried were the commercial satellites from India (1) and USA (13).
PSLV-C51 is the 53rd flight of PSLV and third flight of PSLV in 'DL' configuration (with 2 strap-on motors). This was the 78th launch vehicle mission from SDSC SHAR, Sriharikota.
With today’s launch, the total number of customer satellites from foreign countries placed in orbit by PSLV adds up to 342 satellites from 34 countries.
MORE REPORTS