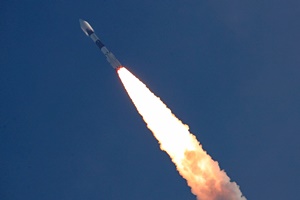 PSLV-C50 lifted off from the Sriharikota spaceport in Andhra Pradesh, and successfully placed the communications satellite CMS-01 into orbit 20 minutes after lift-off.
CMS-01 will provide services in the Extended-C Band of the frequency spectrum whose coverage will include the Indian mainland, Andaman-Nicobar and Lakshadweep Islands.
This is the 77th launch mission from SDSC SHAR and the new satellite will replace the GSAT-12 in the orbit, which was launched in 2011.
This is the first in a new series of communication satellites after the GSAT and INSAT series launched by Isro. It is also the second satellite launched by the space agency after the outbreak of the coronavirus (Covid-19) pandemic.
Isro chairman K Sivan announced the successful launch of the satellite after PSLV-C50 injected CMS-01 precisely in predefined orbit. The satellite is functioning very well and will be placed in a specified slot in another four days, he added.
CMS-01, India's 42nd communication satellite, with a life span of seven years, is envisaged for providing services in Extended-C Band of the frequency spectrum, which will include the Indian mainland, Andaman and Nicobar and Lakshadweep Islands, reported IANS.
The CMS-01 will be a replacement for GSAT-12 that weighed 1,410 kg and was launched on 11 July 2011 with a mission life of eight years, it was further reported.
MORE REPORTS